Weathering the Storm: How Truckers and Fleets Can Prepare for Hurricanes 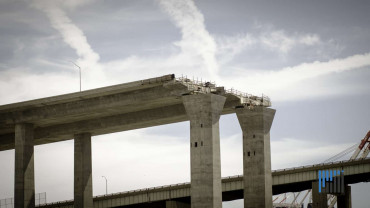 It’s hurricane season, and with a major, and potentially killer storm bearing down on the Florida coast, it’s worth noting that any fleet or driver along the Atlantic seaboard or Gulf Coast can easily find themselves in a similar position this time of year.

Being safe before, during, and after a hurricane is largely a matter of being prepared and staying informed. To better understand how truckers can stay safe and how fleets can protect their assets during a hurricane, HDT reached out to America 1, a regional intermodal carrier and wholly owned subsidiary of US 1 Logistics, based in the heart of hurricane country in St. Augustine, Florida, to find out what steps it takes to deal with storm events, and how it coaches its drivers to be prepared and stay safe.

The first step to being safe in hurricane season is being prepared ahead of time, says Jeff Bowron, vice president of contractor services for US 1. And that means making sure drivers have an ample stash of supplies for dealing with emergencies. This includes items such as bottled water, non-perishable food items, flashlights, rain gear, extra batteries and similar gear.

Publisher's Note: Compare & Save on ELD

“Really, we advise our drivers to have items like this in their trucks all the time, not just during hurricane season,” Bowron says. “Because these are the same kind of things that can be invaluable during a breakdown in the 95-degree Florida heat.”

When it comes to hurricanes, understanding how powerful the storm is and where it’s heading is critical, Bowron says. To do this, he suggests keeping up to date on the local and national news reports concerning the storm, as well as any alerts issued by the National Weather Center or the Federal Emergency Management Administration. By doing so, you’ll be able to determine where the hardest hit areas are, where emergency services with food and medical care are located, what rescue efforts are being deployed, as well as the likely timeline for the storm and its aftermath.

3. Get Ahead of the Weather

If you’re properly informed, Bowron says, you should have anywhere from three days to a full week to begin preparing for a major storm event. And if you act decisively, that should be more than enough time to protect your equipment and fleet assets from storm damage. You can’t do much about where your fleet facilities are located in terms of storm surge and flooding, but you can protect your tractors and trailers from wind damage. If possible, Bowron says, move as many assets as possible to high ground to mitigate damage from flooding. Park trailers as closely together as possible, with empty trailers tightly placed between the loaded trailers, to lessen the chances they’ll be blown around by high winds. Remember, hurricane winds can easily exceed 150 mph in large storms. And empty trailers don’t stand a chance against those forces of nature.

Filling your fuel tanks ahead of a storm is another critical preparation step, Bowron says. Fuel is often expensive and difficult to find in the wake of a storm. And filling up ahead of time will give you the flexibility needed to evacuate if need be, or get back to work quickly or deliver supplies once the storm has passed.

The more tricky move to make ahead of the storm, Bowron says, is to stop working and focus on the emergency. “We’ll stop accepting freight ahead of a storm,” he says. “For starters, the ports are going to be more secure in a natural disaster than a truck loaded with cargo out on the road. So, from a business perspective, there’s simply less likelihood of loads being damaged or even destroyed.”

“There is no freight in the world out there that is worth moving during a hurricane."

Moreover, Bowron says, your focus should be on keeping yourself and your family safe as a hurricane approaches. “There is no freight in the world out there that is worth moving during a hurricane,” he says. “We strongly recommend that our people secure their equipment, get home and batten down the hatches. Priority Number One should be taking care of your family. And, frankly, we haven’t had many issues on this front over the years as hurricanes come in, because we shut down in plenty of time to get people home and safe.”

4. Be Watchful on the Roads

Even though it is clearly best to stay battened down in a safe and secure location during a storm, there are times when getting out in the weather is unavoidable. During an actual storm event, Bowron says winds and storm surge are the biggest dangers to trucks on the road. He recommends being extra cautious on elevated roadways and bridges, because hurricane-force winds can easily topple even a fully loaded trailer.

Once a storm has passed, flooding becomes a major issue. Never take any vehicle into deep, standing water, unless you know for certain that it is safe to do so. “Storm surges are unbelievably powerful,” Bowron cautions. “They can wash roads away completely. So you may have driven down a road that’s covered in water thousands of times and know it by heart – but that doesn’t mean the road is still there.”

It’s also important to be on the lookout for downed power lines and exposed gas mains in the aftermath of a storm, which can easily injure, kill or start fires. And you should always give priority to any military or law enforcement officials on the scene, giving their rescue vehicles the right-of-way and following instructions accordingly.

For the most part, Bowron says surviving a hurricane is about being prepared, exercising common sense and staying informed before, during and after the storm. It’s also a good idea to stay in a safe place until the threat has passed. Hurricanes are dangerous and unpredictable. Treating them as such, from the first storm warning all the way through the aftermath and recovery phase, is the best way to keep yourself safe.