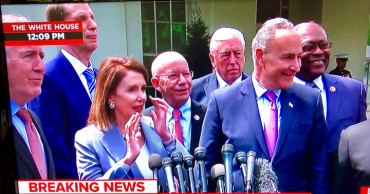 House Speaker Nancy Pelosi and Senate Minority Leader Chuck Schumer tell reporters that their meeting with President Trump resulted in a plan to push for a $2 trillion infrastructure package.

When the Democratic leaders of Capitol Hill emerged from a heavily hyped April 30 White House “good will” meeting with President Donald Trump, they reported to waiting journalists that a bipartisan agreement had been reached to introduce to Congress a $2 trillion plan to modernize the nations, highways, bridges, railroads, power grid, and other key elements of the nation’s infrastructure.

Speaking first to the media scrum on the White House drive was Speaker of the House Nancy Pelosi (D-CA). “We just had a very productive meeting with the president of the United States. We came to this meeting with the recognition that we stand at pivotal place in terms of building infrastructure for the future.”

Pelosi said funding infrastructure is “about jobs, jobs, jobs. It’s about commerce and clean air and clean water and it’s a public health issue, a quality of life issue, and in every way, a safety issue.

“We are very excited about the conversation we had with the president to advance an agenda [for infrastructure funding]. It remains to be seen how it would be paid for [but] infrastructure in America has never been a partisan issue and we have to move forward in a very nonpartisan way for the future.”

Senate Minority Leader Chuck  Schumer (D-NY) also praised the outcome of the meeting. “It was very constructive. It was clear that the White house and all of us want to get something done on infrastructure in a big and a bold way.”

What’s more, Schumer said the conferees “agreed on a number, which is very, very good, $2 trillion for infrastructure. We started a little lower, but even the president was eager to push it up to $2 trillion. And we talked about a number of things we would do [with that level of funding]… obviously, the roads, the bridges, the highways. And every American home needs broadband and we agreed on [upgrading] the power grid and clean energy [projects].

“We told the president we need his ideas on funding and we said we would meet again in three weeks and he would present to us his ideas on funding,” said Schumer. “So, this was a very, very good start and we hope it will go to a constructive conclusion.”

Nonetheless, naysayers will have their say too; largely arguing that the specter of a constitutional crisis erupting over President Trump’s alleged conduct in office vis-à-vis findings of the Muller Report on illicit campaign activities makes doing business as usual on Capitol Hill nigh impossible.

It also did not go unnoticed that no Republican lawmakers sat in on this White House meeting. And while Speaker Pelosi can push pretty much any bill through the Democratic-controlled House, no infrastructure plan will be passed by the Senate without the unequivocal support of Senate Majority Leader Mitch McConnell (R-KY).

Then again, a grand coalition of over 330 business advocacy groups and labor unions has been formed to lend political cover to lawmakers who for whatever reason may think they can’t support a certain level of funding— even in this age of bloated government spending, $2 trillion is nothing to sneeze at-- or a certain method of funding, perhaps because their constituents are so virulently anti-tax they won’t stand for higher fuel levies or tolling highways.

The text of the letter argues for putting the country “on course to achieving the long-term, stable and sufficient funding that our crumbling transportation infrastructure desperately needs. Revitalizing our infrastructure would raise the quality of life for all Americans, create good, well-paying American jobs, and serve as a critical component to maintaining our economic prosperity and competitiveness around the world."

The authors state that “America’s economic and social strength throughout the 20th century was driven by investments in infrastructure championed by Presidents Roosevelt, Eisenhower, and Reagan. However, that leadership position is now threatened by inaction on the much-needed modernization of an infrastructure network essential to continue our nation’s global dominance.”

They also make the point that already 35 state legislatures and governors “have shown it is not only possible to fund infrastructure, but it is a winning political issue.”

The letter also requests that several “core principles” be adhered to in developing the enabling legislation to fund a massive infrastructure program. Chief among these are addressing the current crisis and investing in the future, funding “with real money, not gimmicks, and providing “the vision and the bridge to ensure that transportation in 5, 10, or 20 years has an appropriate system of user fees and funding that matches the vehicles and society of that future.”

In closing, the authors note that “the last president to increase the federal user fee on fuel was Bill Clinton, and the last to directly appeal to the country to fund infrastructure was Ronald Reagan.”

"Defining the scope of the problem and outlining a vision to address it is an excellent start, but action is what is needed next,” American Trucking Associations President and CEO Chris Spear said in a statement released after the White House meeting. “When these leaders reconvene in three weeks, we call on President Trump and Congress to demonstrate the kind of courage that Presidents Reagan and Clinton once did and advance an infrastructure bill with real increases in revenue – the kind of immediate funding that can only come from increasing the fuel tax.”

To be sure, as the letter and the comment by ATA’s chief make crystal clear, the political battle of wills will not be about whether the United States should invest massively in repairing and upgrading its infrastructure, but which means of funding should be leveraged to come up with the trillions of dollars needed.