2020 projected to be ‘a tough year’ for trucking 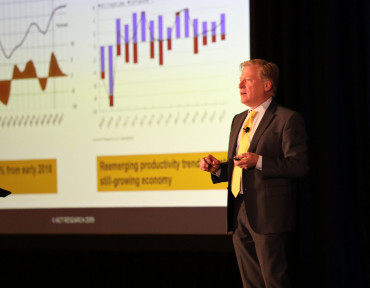 Business conditions in 2019 have been more challenging for carriers than 2018 – a year that held two of the best quarters of revenue in the history of trucking.

Tax cuts in 2017 boosted activity to white-hot levels last year, but tariffs threw cold water on it mid-year and accelerated the economy’s return to a more normal trend during 2019.

“We believe about 20% of the profitability from publicly traded carriers comes from these tax cuts,” said ACT Research President Kenny Vieth, who lead an economic session at CCJ‘s Solutions Summit in Scottsdale, Arizona, Tuesday.

“In the first quarter of 2018, the world was awash in manufacturing good news,” he said, adding tariffs quickly started to suppress that growth. “Tariffs have been the driver in slowing down the entire global economy.”

Tariffs and a looming trade war raise the risk of an economic recession, and Vieth noted that an industrial recession is already underway in the U.S., which has led to a freight recession across all segments.

“The evidence overwhelmingly suggests 2020 is going to be a very, very tough year,” he said. “Freight recovery is dependent on the speed at which equipment supply and freight demand are brought back into line.” Active capacity is up 10% over early 2018 – the fastest fleet capacity growth since 1999 – but Vieth said re-emerging productivity trends negate a still-growing economy.

Freight down markets, Vieth said, tend to last from 1 to 2 years, and added “we’re really a full year into this at this point.” He expects freight to stabilize, even grow, in 2020 and into 2021.

Private fleets have taken up to 5% of marketshare from for-hire carriers, which has helped pull down per-mile rates. The gap between contract and spot rates this year, Vieth said, has been about 18 cents per mile and October data suggests contract rates could fall another 5-10% early into next year.

Contract rates are down about 2% this year, but it’s not significantly impacted profitability fueled by tax cuts. Margins are still at near-record levels among publicly traded carriers, but are down about 6% from last year, Vieth said.

The resolution of  trade stalemate between the U.S. and China, Vieth said, has a high upside for trucking as it would “accelerate the global economy, spurring a strong rebound in commodity pricing and machinery demand.”

Carriers, bolstered by high rates and customers desperate to move goods, added a lot of new equipment last year and pushed truck orders to record levels. But now, Vieth said, there’s about 75,000 more tractors in the market than are needed to haul freight  – “roughly about 5% too much tractor capacity,” he said. Capacity rebalancing hasn’t started yet and by January 2020, Vieth said he expects capacity will be up 13% from January 2018.

Trailer orders last month, hitting 31,800 units, signal some level of confidence in the freight markets going into next year. Heavy truck orders in October reached 22,100 units according to ACT Research – their highest level since November of 2018. However, October 2019 order activity was the weakest performance for the month since 2016 and were 51% lower than October 2018, signaling a subdued beginning to the traditional start of the ordering season.

More trucks in the market hasn’t necessarily led to more problems finding people to drive them.

“We have had an easing of the driver shortage,” Vieth said, which he added lessened capacity constraint.

Vieth said the industry has added about 2,000 drivers this year and suggested forecasts indicating the industry will see a driver shortage of upwards of 160,000 people over the next decade – a figure that would account for the movement of roughly 10 percent of all road freight – are wildly incorrect.

“If 10% of the freight wasn’t moving, we would have the worst recession that we’ve had since 1933. The economy can’t grow if freight can’t move,” he said. “Not having drivers is not an option. Someone will deliver the freight. A sharp shortage at economic inflections represent temporary imbalances between driver supply and freight demand.”

Vieth did concede it will become more difficult to attract drivers but noted “periods of shortage have historically been accretive to profit margins.”

Despite some negative trends heading into 2020, Vieth said business optimism remains broadly positive and still well above almost every other year in the decade.

Building permits are up but the U.S. has seen a slowdown in the rate of new home rate appreciation, which Vieth said is good for affordability as personal income continues to grow.

“The slower something [the economy] moves,” he said, “the easier it is to stop it.”