A year of ELDs, and the fast-approaching AOBRD deadline 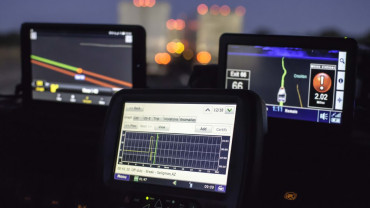 If 2018 could be called the year of the electronic logging device (ELD), then get ready for a potential repeat in 2019. While much of the industry switched over to ELDs by the April 1, 2018, hard enforcement deadline, there were still some stragglers. Those who used automatic onboard recording devices (AOBRD) prior to the Dec. 17, 2017, soft enforcement deadline are still able to continue doing so, but time is running short. The deadline is December 16, 2019, for all drivers using AOBRDs to convert to ELDs.

Ahead of that AOBRD deadline, though, FreightWaves interviewed Daren Lauda, vice president and general manager of North America for Teletrac Navman. Lauda commented on how far the industry has come since ELDs went mainstream. “You had a lot of people, in my perspective, slow to adopt,” he said. “They really pushed the deadline.”

That late adoption created a capacity crunch for devices and installation, with some suppliers/retail locations running out of devices and software glitches taking longer to solve as companies tried to onboard thousands of users at once. Lauda hopes the 2019 AOBRD deadline will run much smoother for the industry.

“I do worry about those problems recurring, but I don’t think it will be as bad,” he said. “I think providers – us included – learned a lot.”

While some drivers have continued to rail against ELDs and the lack of flexibility they provide, Lauda acknowledges what much of the industry has learned. “The technology wasn’t broken; the rules changed,” he said, noting that the ability of drivers to manually “adjust” their paper logs disappeared.

“I see some drivers in ELD chat rooms saying ELDs are not the problem,” he related. Lauda said that he has seen a shift in driver attitudes to the devices, perhaps not to “we love ELDs,” but at least acceptance, which is far from the initial anger that dominated social media channels.

Over the past year, uneven enforcement was a concern of many, and Lauda said that he spent considerable time writing letters on behalf of Teletrac Navman customers to help exonerate them of wrongdoing.

“In May (2018), I was seeing a lot of strange enforcement [decisions] and I was writing a lot of letters,” he said, “but I’m not seeing that as much. I’m not writing many letters now.”

Fleets are expressing interest in utilizing ELDs more productively, Lauda said, noting that they are helping connect trucks and people like never before. Additional device functionality is coming online as well and that is leading to more data. The addition of cameras – both forward and driver-facing – is also growing, creating even more opportunity.

“At some point, we’ll see a tipping point that companies like Convoy [can leverage] because of the connected truck,” he said. “People can start thinking about [managing drivers more effectively] because the equipment is there now.”

As to the pending switchover of remaining AOBRD users – which could be in the tens of thousands of users – Lauda sees the same learning curve for those drivers as previous ELD adopters faced.

“We’ve already begun [the push to switch],” he said. “If you joined our system in the last couple of years, it’s a simple software update, but the [user change] is more difficult.”

For some drivers, especially those that use older AOBRD devices, they will require a new ELD device, and Lauda advises not waiting to avoid some of the issues that occurred in April.