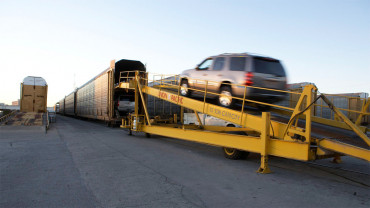 Despite President Trump’s announcement on April 4 that he is giving Mexico a “one-year warning” before closing the southern border, a group of 18 organizations, including the American Trucking Associations and the Association of American Railroads, asserted in a letter to the White House that billions of dollars of freight flowing through rail and trucking supply chains is still at risk.

“While the signers are aware of the announcement today that the Administration will hold on completely closing the border, the threat remains strong for a slowdown,” the coalition stated in a press release. “That is why the primary message of the letter is: ‘As the Administration continues efforts to protect and secure our nation’s borders, all cross-border freight traffic, whether by truck or rail, must be allowed to flow unimpeded.’”

The April 4 letter was addressed to White House economic advisor Larry Kudlow and White House acting chief of staff Mick Mulvaney, and copied to the secretaries of Commerce, Treasury and Homeland Security. It cited a U.S. Department of Commerce estimate of $1.4 billion worth of goods crossing the border in trucks and trains each day last year.

“Unfortunately, any disruption to the flow of commerce resulting from the full or partial closure of our border would have a cascading effect – harming U.S. consumers, threatening American jobs and investment, and curtailing the economic progress that the Administration has worked to reignite,” the letter stated.

President Trump, in a series of tweets on March 29, threatened the close the border over illegal immigration. On April 2, Kudlow said the Administration was looking at ways to allow trade to continue to flow in the event of a shutdown. Trump backed off the threat, however, telling reporters at the White House that if, after one year, “the drugs don’t stop, or largely stop, we’re going to put tariffs on Mexico and products, in particular cars. The whole ballgame is cars. And if that doesn’t stop the drugs, we close the border.”

Six of the 18 organizations signing the letter are affiliated with the auto industry, which would likely feel the most pain in the event of slowdown at the border.

“The auto sector – and the 10 million jobs it supports – relies upon the North American supply chain and cross-border commerce to remain globally competitive and a forced shutdown of auto assembly plants due to a border closure would cost the auto industry billions of dollars per day,” the groups asserted.

The letter also noted that more than 42 percent of carloads and intermodal moved by U.S. railroads are tied directly to international trade, which supports 50,000 railroad jobs. For the U.S. trucking industry engaged in cross-border trade with Mexico, more than 31,000 truck drivers are employed, the coalition claimed.

The groups closed by stating, “We stand ready to provide input to you and others in the Administration as you work to advance policies that promote economic growth for our nation, while preserving cross-border trade.”