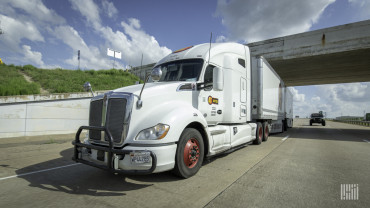 It is just one of what are now believed to be more than 1,200 lawsuits filed by workers against their employers over a COVID-related dispute or claim.

The late-November suit filed by a dockworker from the Joliet, Illinois, depot of LTL carrier Estes Express can be seen as potentially a somewhat typical lawsuit in the flood of litigation that is likely to be filling the inboxes of trucking companies around the country in the coming weeks and months.

But the list of these lawsuits is growing. Gerald Maatman, who specializes in employee-employer litigation for the Chicago firm of Seyfarth Shaw, said in an email to FreightWaves about the Estes Express suit: “The lawsuit is pretty common these days. I have seen 10 like this over the past 30 days.”

The suit also comes as the whole question of the proper venue for COVID-related claims has arisen. In early November, a lawsuit filed by several workers at an Amazon distribution center in Staten Island, New York, saw a federal district court judge push the issue into the administrative process of the Occupational Safety & Health Administration and out of the court system. That is a victory for Amazon.

“A trucking company would often prefer to have such a case decided through the OSHA process or workers compensation forum,” Jack Finklea, a partner with the trucking-focused law firm of Scopelitis, Garvin, Light Hanson & Feary, said of the Amazon action.

In the action against Estes, dockworker Jamaal Watts said that in late April, he learned that two of his co-workers had contracted the coronavirus and were not able to work because of that. However, possible infection of their work site appears to have been an issue.

As a result, Watts asked that he not be required to come to work “while his co-workers remained contagious,” according to the suit filed in U.S. District Court for the Northern District of Illinois. “Watts’ supervisor at Estes denied that request and ordered the plaintiff to return to work the next day,” according to the lawsuit.

Watts did go back to work on April 29, the suit said, but also requested to work just eight hours “to minimize risk from the first shift employees because of his exposure the day before to the infected employees,” according to the suit.

Watts came to work on April 30 “but was told to leave the premises.”

The amount requested in the suit is hardly earth-shattering: $75,000, plus costs. But multiply that by hundreds of suits and the cost of litigation and any financial payouts can start to add up.

The law firm of Barnes & Thornburg has put together a compilation of what it believes are significant COVID-related lawsuits. It cited several cases in the trucking and freight sector.

— A suit against Stone Transport Holding in the Eastern District of Michigan, in a dispute over whether a delay for an employee awaiting results of a COVID test was improperly dismissed while waiting for that information. The suit charges that the employers were “angry with the amount of time it took for the VA hospital to return the results.”

— A New Jersey driver for J.B. Hunt who was involved in an incident and terminated, but which the driver believed was retaliation for earlier complaints about his view that drivers were not being given sufficient personal protective equipment for when they were out on the road.

— A lawsuit in California against Freight System LLC that is a mix of both driver classification questions and alleged retaliation for a driver complaining about being assigned a truck that he says had not been sufficiently sanitized.

— A lawsuit brought against Goliath Freight in the southern district of Indiana that turns on whether an employee was required to come back too soon coming out of quarantine.

While those may be the only four cases specifically listed by the law firm as being trucking- or freight-related, the long list of citations in all sectors gathered by the law firm falls under several different categories, ranging from breach of contract to workplace safety, and many in between.

Workers’ compensation also is a category. And while that was not the issue in the Staten Island case against Amazon, the significance of that case is that the plaintiffs’ arguments, rather than being dismissed, were pushed into the OSHA process. That is not the same as workers’ compensation, but the case does help establish the principle that administrative processes might be more suitable to such disputes.

One part of the opinion written by Judge Brian Cogan seems particularly relevant to the issue of who is going to adjudicate these disputes. Cogan essentially said: I’m no expert.

“[Plaintiffs] would have me analyze how Amazon’s employment practices and policies impact transmission of a poorly understood disease … determine whether those policies create an unsafe workplace or otherwise violate state and federal guidance and standards, and implement and oversee new workplace policies,” Cogan wrote. “But courts are not expert in public health or workplace safety matters and lack the training, expertise and resources to oversee compliance with evolving industry guidance.”

To drive home his point, Cogan said: “Plaintiffs’ claims and proposed injunctive relief go to the heart of OSHA’s expertise and discretion.”