Officials Call $202,000 Towing Bill a Textbook Example of a Scam 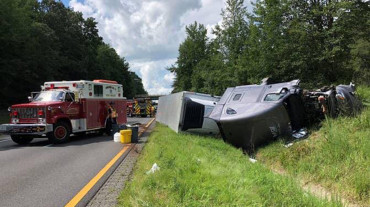 A Wisconsin motor carrier got a big surprise when one of its tractor-trailers hauling a truckload of cheese had to be pulled from a ditch on I-64 in central Virginia: A $202,000 removal and towing bill.

“We all fell off our chairs,” said Eric Van Handel, the president of Kaukauna, Wis.-based Midwest Carriers, when he saw the bill. He immediately suspected he was being overcharged for a removal and towing that he claimed was pretty routine. He keeps a copy of the Aug. 23, 2020, invoice on his office bulletin board to amuse his visitors.

Jennifer Wieroniey, executive director of American Trucking Associations’ National Accounting & Finance Council, called the invoice a textbook example of an outrageous charge for “just a simple tow.” The NAFC is collecting information from its members on predatory towing billing and plans to seek legislation to stop the unscrupulous practice.

An interview with an employee at Bumpass Towing of Bumpass, Va. — the company that handled the job — disputed that it was a simple removal and tow, or that the invoice was too high.

“Where’d you get your information from, because it’s wrong,” said the employee, who declined to share his identify. “I didn’t charge that. They settled on a payment.”

The employee said the truck was damaged and that its load had spilled. A report by Goochland County Fire-Rescue did not mention a food spill, but said “approximately 25-50 gallons of diesel fuel had already spilled in the ditch line, and there was an active diesel leak from the truck saddle fuel tanks carrying approximately another 165 gallons of fuel.”

“It was a single-vehicle accident,” Van Handel said. “It was a situation with our driver. The truck had turned over.”

He added, “As far as I remember, all of the freight was still inside the trailer. They basically had to get the truck turned upright. It wasn’t anything out of the ordinary. I would have guessed it would have been a $20,000 or $30,000 bill.”

In the end, Midwest, a 48-state refrigerated carrier, got its insurance company involved and negotiated the bill down to about $90,000, an amount that Van Handel said he still regards as a significant overcharge.

“For what was performed, that was still pretty crazy,” he said. “There are certain states where things are very difficult. Virginia proved to be one of those states.”

“That, unfortunately, is the wild, wild west situation we have here in Virginia,” said Dale Bennett, president of the Virginia Trucking Association. “Companies are called out to perform a tow, and they present whatever invoices they want to — without any regulation on the price or oversight on the price they charge.”

Bennett added, “The only recourse the vehicle owner has is to go to court.”

The Bumpass employee suggested that it’s common for towing companies to submit invoices that may seem high, but which later are negotiated to a lower amount.