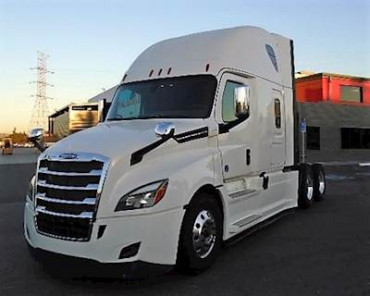 Orders for Class-8 trucks – the heavy trucks that haul consumer goods, equipment, commodities, and supplies across the US to feed the goods-based economy – plunged 52% in April compared to April last year, to 16,400 orders, according to FTR Transportation Intelligence on Friday. It was the lowest April since 2016 when the industry cycled through its last transportation recession. This comes after orders had already plunged 67% year-over-year in March, 58% in February and January, and 43% in December.

The collapse in orders is on the scale of the last transportation recession in 2015 and 2016. The chart shows the percent change of orders for each month compared to a year earlier:

The industry is very cyclical with big swings in both directions. Trucking companies get exuberant when capacity tightens and freight rates shoot up as they did in late 2017 and 2018, and they’re inclined to order when business is booming, but it takes a while to get these trucks built, and order backlogs at truck manufacturers piled up to reach close a year at the peak in 2018. Fear of not getting the equipment when they need it can cause industry-wide bouts of over-ordering at the peak of the cycle, which was summer 2018.

But as capacity rises, and the cyclical freight business backs off from its blistering growth phase and ticks down a little as it has been since late 2018, trucking companies adjust by reducing their orders, and when push comes to shove, if they can still do it, by cancelling their orders. And that’s what is happening here.

The boom in truck orders peaked in July and August 2018 with 52,000 orders each month and has since totally faded. April was the fourth month in a row of orders below the 20,000-unit mark (data via FTR):

During the last transportation recession in 2015 and 2016, truck manufacturers – Paccar (Peterbilt and Kenworth); Navistar International; Daimler (Freightliner and Western Star); and Volvo Group (Mack Trucks and Volvo Trucks) announced waves of layoffs that rippled to some of their suppliers, including diesel-engine manufacturer Cummins.

So far, the historic backlog of Class-8 orders created during the ordering boom last year is buffering production. But changes are afoot, according to Don Ake, FTR VP of commercial vehicles:

“Near-term build slots are becoming available as fleets rearrange orders based on current needs. There still is limited cancellation activity, as fleets do not want to give up build slots they may need at a later date.”

“Some washout of the backlog due to increased cancellations is still expected to occur later this year.”

Trucking companies in recent months have been facing a very different market than in 2018 through last summer. Shipments by all modes of transportation – truck, rail, air, and barge – fell on a year-over-year basis for the fourth month in a row in March, according to the Cass Freight Index, which tracks shipments of goods for the consumer and industrial economy but does not cover bulk commodities, such as grains or chemicals. They were the first year-over-year declines since the transportation recession of 2015 and 2016:

Trucking companies are beginning to discuss the consequences of this change in shipping dynamics of a downtick in volume on an increase in capacity. For example, Greg Gantt, CEO of Old Dominion Freight Line, one of the larger trucking companies in the US, made reference to the new environment during the Q1 earnings call (from the transcript via Seeking Alpha):

“So, we’re just seeing some aggression that we have not seen in prior years. It’s not widespread at this point, but we are seeing some. So I think time will better tell that story, but we have seen a little more aggression than we’ve been used over the last couple of years.”

And when truckers are starting to have to fret over cutting prices in order to maintain volume, it’s also time to review the orders for new equipment and cull non-essentials. And it ripples across the industry.

J.B. Hunt, the largest US trucking company has spoken on this topic: “Volume, or lack thereof, is obviously the main story.” The inventory pile-up hurts. And the driver shortage is ending. Read…