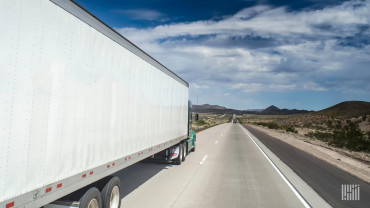 Year-over-year declines in the Cass Freight Index accelerated in March, with the shipments index declining 9.2% and the expenditures index dropping 8.2% for the month.

“This ends any chance of 2Q20 seeing y/y growth in domestic U.S. shipments and freight costs,” the report’s author and Stifel Financial (NYSE: SF) equity research analyst David Ross lamented. “This has quickly gone from a China production concern to a U.S. (and global) consumer spending problem. No business, no jobs, and no income for many leads to much less freight moving around.”

Even though COVID-19-related lockdowns led to approximately a month of truckload volume improvement on a year-over-year basis as evidenced by FreightWaves’ Outbound Tender Volume Index, the strength was largely concentrated in e-commerce and home deliveries of groceries and household supplies. The index has reversed course, with 2020 volumes retreating well below 2019 levels.

“There has been a clear divide between winners and losers of these shut-in orders, with demand for groceries, home improvement, e-commerce and consumer staples increasing, while restaurant, auto and (mall) retail falling to practically zero volume,” Ross stated.

March nonfarm payrolls shrank by 701,000, with the unemployment rate climbing to 4.4%, a likely sign of what is to come as the survey period extended only through the 12th of the month before most lockdowns went into place. The sudden closure of the economy led to 6.6 million new unemployment claims in the recent week with more than 16 million filing for benefits in a three-week period.

The expectation of further erosion in freight fundamentals is the consensus; how much so remains the question.

“April will undoubtedly be worse and likely the worst month in a long time,” Ross said.

Ross expects shipment volumes to trough in April with “a rebound in weekly volumes later in 2Q20 to signal a climb back toward more normal economic activity.” He noted that they’re keeping an eye out for carriers exiting the market and “a potential restocking event” as catalysts that could drive rates higher later in the year.

The Cass TL Linehaul Index, which measures per-mile linehaul rates excluding fuel and accessorials, fell at a rate not seen since the global financial crisis. The 6.6% year-over-year decline was the largest for the index since June 2009, similar to the declines seen in the first two months of 2020.

Rates for carriers with exposure to consumer-packaged goods or e-commerce have held up better than those carriers that are more business-to-business or industrial-oriented. Even with a spot market rate bump on the recent volume surge, the linehaul index remains weak. Ross noted that the first-quarter weakness in the index, which has a “strong correlation” with pricing metrics provided by the publicly traded truckload (TL) carriers, bodes poorly for first-quarter 2020 earnings results.

“This broad pricing pressure should last a little longer, but then when the economy reopens (and it will), we’ll see how many truckers are left and how much freight needs to be moved,” Ross added.

Total per-mile intermodal costs as captured by the Cass Intermodal Price Index eroded 4.4% year-over-year in March. Rail intermodal traffic is off more than 9% year-over-year so far in 2020, according to the Association of American Railroads. As long as TL pricing remains pressured, so will intermodal rates.

“We hope the Cass Indexes bottom in April, and the quicker businesses can reopen, the better readings we should see in May and June,” Ross concluded.

Cass processes more than $28 billion in freight payables on behalf of its clients annually.