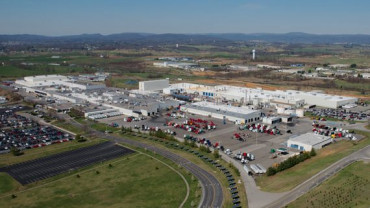 Production stoped Apr 17th at the plant as about 2,900 United Auto Workers members went on strike.

A five-year collective bargaining agreement expired in mid-March. Negotiations began on February 8, 2021. The walkout happened after the expiration of a 30-day extension. It was the first such strike for Volvo since 2008.

On April 30, negotiators for Volvo and the UAW reached a tentative agreement and employees went back to work on May 3.

According to the UAW local 2069 web page, workers voted 91% against the deal.

Volvo said it was informed that UAW-represented employees would still report to work on May 17.

“We look forward to working with the UAW to resolve whatever the outstanding issues are, and we remain confident that we will be able to reach a mutually beneficial agreement,” said NRV Vice President and General Manager Franky Marchand in a statement.

The NRV plant employs more than 3,300 people, about 2,900 of whom are UAW members, according to the announcement from Volvo. The plant is in the midst of a $400 million investment for advanced technology upgrades, site expansion and preparation for future products, including the Volvo VNR Electric truck. The plant has added 1,100 jobs since the last union agreement was implemented in 2016 and is on track to have a net increase of approximately 600 positions in 2021, according to the company.