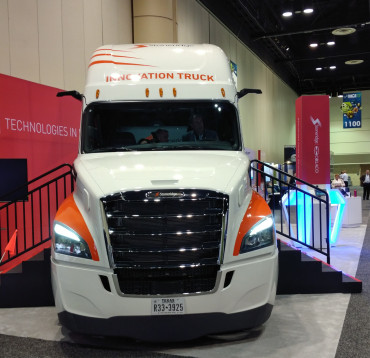 Trucks without mirrors are entering the testing phase, but they could soon become a reality.

Someday in the near future, there will be no need for mirrors on commercial trucks because they may be no drivers to look into them. But until that day, mirrors remain a key part of the safety equation for truck drivers.

Like everything else, though, companies are using technology to change that. So-called “mirrorless trucks” are already out on the highways being tested, and the camera technology being used could replace mirrors in the very near future, leaving drivers turning to video displays rather than physical mirrors.

The impact this will have on insurance premiums is unknown. Several commenters at the recent unveiling of the Nikola Motor hydrogen-electric truck, which is designed without mirrors, noted that it will take some time for insurers to weigh in because there isn’t enough safety data available yet for them to quantify the value.

“There are no external mirrors,” Jason Roycht, vice president of commercial vehicles for Bosch, which supplies the camera system for the Nikola truck, proudly said at the event. “We like this from an aerodynamic perspective; we like it from a safety perspective.”

The Bosch system removes sunlight reflection and allows for night enhancement, both of which improve overall visibility, Roycht said. “There is so much innovation [possible] around these cameras,” Trevor Milton, Nikola Motor co-founder and CEO, added.

Bosch isn’t the only company working on camera systems designed to replace mirrors. Stoneridge (NYSE: SRI) was one of the early supporters of this technology with its MirrorEye system.

“We remain well-positioned to commercialize MirrorEye in the retrofit market with broader rollouts with our freight partners expected in the second and third quarters of this year,” Jon DeGaynor, president and CEO of Stoneridge, said during his company’s second quarter earnings call on May 2, 2019. “Additionally, we are expecting an OEM [original equipment manufacturer] sourcing decision to be made in the second quarter with two more made by the end of the year or early next year. We remain optimistic related to our OEM pursuits and will provide updates as decisions are made.”

Earlier this year, at the Technology & Maintenance Council meeting in Atlanta, the organization’s Cab & Control Study group asked for industry input from fleets and drivers using these systems.

Current law requires two outside mirrors that show the driver both sides of the commercial truck. As most drivers know, though, that leaves blindspots, which the manufacturers of these camera systems believe can be eliminated.

Stoneridge explained the MirrorEye system in detail when applying in 2018 for an exemption from the external mirror requirements from the Federal Motor Carrier Safety Administration (FMCSA).

“The MirrorEye CMS consists of multiple digital cameras mounted on the exterior of the CMV and enclosed in an aerodynamic package that provides both environmental protection for the cameras and a mounting location for optimal visibility. Each camera has video processing software that presents a clear, high-definition image to the driver by means of a monitor mounted to each A-pillar of the CMV, i.e., the structural member between the windshield and door of the cab. The company explains that attaching the monitors to the A-pillars avoids the creation of incremental blind spots while eliminating the blind spots associated with conventional mirrors,” the exemption request noted.

FMCSA approved a five-year exemption for the MirrorEye late in December 2018.

Stoneridge touts a 25 percent greater field of view for the system compared to conventional mirrors. The system utilizes independent video processing of multiple camera images so that in the event of an individual camera failure, the other camera images continue to be displayed. This ensures that real-time images are continuously displayed without interruption. And, the use of high-definition digital cameras provides for color night vision, low-light sensitivity and trailer panning capabilities. This assists with night driving, operating under other low lighting conditions and provides for glare reduction.

“Stoneridge also believes use of its CMS may help to reduce driver fatigue by requiring less head movement by drivers compared to the number of head movements needed to use conventional mirrors,” the company said.

The MirrorEye system features a 12.3-inch high definition display on the driver’s left and a 15-inch display on the right. In the middle top of the window is another display, giving the driver complete visibility from as many as six cameras mounted on the vehicle.

Other manufacturers are testing camera systems in lieu of mirrors, but the question remains how robust, dependable and durable will the systems be in real-world operation? Stoneridge and Bosch will start to find out this year as Stoneridge’s system will hit roads with test fleets and Bosch is currently testing its system in Europe.

Once those questions are answered, it will be up to insurers to determine how valuable these systems are and whether discounts will follow.