3 Fleets on the Benefits of Hair-Testing for Drugs

Fleets that have implemented hair testing for illegal drugs in addition to the DOT-mandated urine testing for commercial truck drivers say not only is it the right thing to do, but it also offers benefits that fleets might not think about.

In a July 29 webinar from Psychemedics, which is a major hair testing lab, safety professionals from KLLM, Maverick, and U.S. Xpress shared their experiences with hair testing.

All three emphasized that first of all, hair testing is the right thing, the moral things, to do. Because the mandated pre-employment urine testing only catches drug use from the past few days, it’s pretty easy for habitual drug users to just abstain for a week, or use various methods to cheat the tests. Hair testing shows a history of drug use for about three months, as the drugs are metabolized into the bloodstream. Hair is nourished by blood and those metabolites stay in the hair.

In fact, a study comparing the dual hair testing and urine testing of drivers by the Alliance for Driver Safety and Security, known as the Trucking Alliance, found that urinalysis missed nine out of 10 illicit drug users.

Wilson Risinger, vice president of safety for KLLM, said when peers in the industry that were doing hair testing shared results like that, “it became a pretty sobering realization for us that we were missing a lot of drug users doing only urinalysis. People could just stop using drugs for a few days before orientation and pass the drug screen. We had to ask ourselves the questions, when they failed the hair test at [a company doing hair testing], where were they going next? Probably us or someone like us. It wasn’t a very comfortable realization for us.” 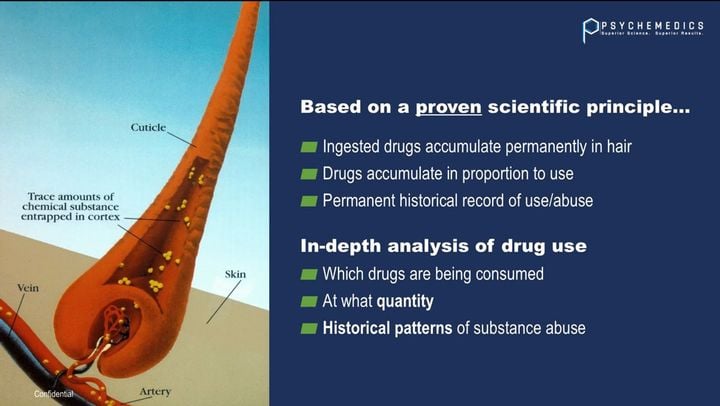 Hair testing proponents say it can detect drug use from the past several months.

One of the people sharing that data was Dean Newell, vice president of safety and driver training for Maverick, which was an early adopter of hair testing in trucking. “We have a moral obligation to put the safest driver we can in the cab of our truck. At the end of the day it was the right thing to do,” he said.

Maverick has been drug testing since August 2012, and as of the end of June has competed a little more than 10,000 hair tests, Newell said. “The thing I’m proudest of, since we implemented this, we’ve had zero positives on a post-accident drug test.”

At KLLM, which started hair testing in 2018, the side-by-side comparison found more than 900 driver applicants testing positive for drug use with the hair test would have beaten the urine test and been put forward in the hiring process.

U.S. Xpress started hair testing in late 2018, starting with its student driver hires, which make up about half of its hires. “Someone who’s never operated a commercial motor vehicle before, we thought, maybe that’s a good place to cut our teeth.” And in fact their initial positive results were higher than the later numbers for the entire fleet. “I think that’s indicative of someone who doesn’t have a CDL coming into an industry that is very safety sensitive.”

All three reported that when they first started hair testing, it temporarily slowed their recruiting funnel.

At U.S. Xpress, where they were hiring an average of 100 students a week, the number hired plummeted within days when the company implemented hair testing, down to 30-40 drivers. “But once we got past that 30 day mark we saw it increase back up, and we got back up to that 100 within about 60 days,” McQuagge said.

At KLLM, Risinger said, other companies that were doing hair testing had told them to expect a 13-15% positive rate using hair testing instead of the 1-2% being disqualified via urine testing. “But that was the objective, right? So we were good with that. Those were people we didn’t want to put in the truck anyway.”

But within 60-90 days, they said, it was back to normal as word got out that the company was hair-testing, so habitual drug users just stopped applying.

“Before we were doing hair tests, I would hear questions going to our recruiters that sit right outside my office, ‘Do you hair test?’” said Greg McQuagge, vice president of safety for U.S. Xpress. “There’s a reason why that driver’s asking that question.”

At Maverick, Newell said, recruits get the word multiple times during the recruiting process that hair testing is required. “I think the more you tell them up front, I think the less positive rate you’re going to have.”

He reported that initially there was a higher rate, but that came down as the deterrent effect kicked in. “The year of 2020 so far I’ve tested 415 random tests, which we’re required to do, and I’ve had zero positive randoms this year. (Random testing is done via urine.) Clearly the deterrent factor works. You stop them up front and don’t have the issues later down the road.”

At KLLM, Risinger said, “even the positive rates on the DOT urine decreased by 57% between the start of hair testing and mid 2020. We do the same thing, let people know early and often they will have to take a hair test. We think it’s a big deterrent. We used to get those same calls, the first question the applicant would ask is, “Do you do hair testing?’” When you say yes, the next thing you hear is ‘click.’ If that’s their first question, you honestly don’t want them in your orientation.”

Other Benefits of Hair Testing for Drugs

All three fleet panelists cited other benefits to hair testing as well, benefits that outweigh the added cost of having to add hair testing on top of the required urine testing. “It wasn’t why we did it, but drug users may have more injuries, less productivity, what you might call soft costs,” said Wilson Risinger, VP of safety, KLLM.