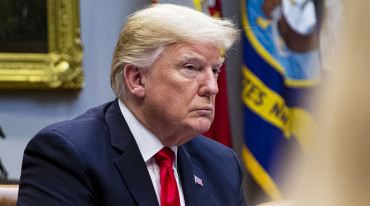 President Donald Trump said he would drop plans for tariffs on Mexico that he’d been threatening to impose for the past week after the country promised new steps to stem an influx of illegal migration into the U.S.

“I am pleased to inform you that The United States of America has reached a signed agreement with Mexico,” Trump said in a tweet June 7. “The Tariffs scheduled to be implemented by the U.S. on Monday, against Mexico, are hereby indefinitely suspended.”

Under the deal, Mexico will expand deployment of its national guard throughout the country, “giving priority to its southern border,” according to a joint statement from the two countries. Asylum seekers who cross into the U.S. will be quickly returned to Mexico where they’ll wait for their claims to be resolved; the U.S. agreed to accelerate adjudication.

Trump’s decision marked a dramatic turnaround after he persistently criticized Mexico for failing to prevent Central American migrants from traversing the country to get to the U.S. The decision marks a victory for Mexican President Andres Manuel Lopez Obrador, whose administration had been pressing Trump to drop the tariff threat.

The deal preempts Trump’s planned 5% tariff on all Mexican imports to the U.S. that the president said could increase to 25% by October.

The decision was welcomed by Republicans and others who warned the tariffs would damage the American economy, hurt job growth and delay or altogether scuttle a trade deal between the U.S., Canada and Mexico, known as the USMCA, which still needs lawmaker ratification. Mexico is the second-biggest source of U.S. imports.

“Mexico came through,” said Sen. Chuck Grassley, an Iowa Republican opposed to the tariffs, in a tweet soon after Trump’s announcement.

“I look forward to working with the administration and my colleagues in the House and Senate to pass USMCA without delay so that American companies and workers can reap the benefits of this updated and modernized agreement,” Rep. Kevin Brady (R-Texas), said in a statement.

The Senate Democratic leader, Chuck Schumer of New York, tweeted a sarcastic reaction to the deal to Trump: “Now that the problem is solved I’m sure we won’t be hearing any more about it in the future.”

Mexico said the deal was reached after several days of talks, including 12 hours of discussions on June 7.

The U.S. originally demanded that Central American migrants apply for asylum in Mexico instead of the U.S. Mexico beat back that demand, but formally agreed to host the asylum seekers until the U.S. processes their claims.

The joint statement said both sides would work together to “implement a durable solution.” Discussions will continue, they said.

The two countries said they’ll work to “to build a more prosperous and secure Central America to address the underlying causes of migration, so that citizens of the region can build better lives for themselves and their families at home.” The statement didn’t elaborate on how that would be accomplished.

Duncan Wood, director of the Mexico Institute at the Woodrow Wilson International Center for Scholars in Washington, said Mexico avoided tariffs but “will pay a heavy price.”

“Potentially tens of thousands of refugee claimants will have to wait in Mexico while their claims are processed,” he said. “Mexico will have to house, employ, educate and provide health care for them. This is a huge commitment."

The tariff threat has rattled markets and prompted economists to forecast an increased risk of recession in the U.S., the world’s largest economy, because trade between the U.S. and Mexico is so integrated. An all-out trade war would lower global gross domestic product by 0.8% or $800 billion by mid-2021, according to Bloomberg Economics.

The uncertainty and the subsequent negotiations in recent days caused significant movements in the peso, Latin America’s most-traded currency. But by the time the deal was reached, trading had ended. It will resume on June 9.

The number of apprehensions and people denied entry along the U.S.-Mexico border has been rising steadily. More than 144,000 people were apprehended after illegally crossing the southern border in May or were refused entry to the U.S., Customs and Border Protection announced on June 6. That’s the the most in a single month in at least five years; the number has grown every month since January.

Trump threatened the tariffs on May 30 — the same day the administration sent a notice to Congress to try and kick-start passage of the USMCA, which Trump negotiated to replace the North American Free Trade Agreement. Vice President Mike Pence also spent that day stumping for the deal’s passage in Canada.