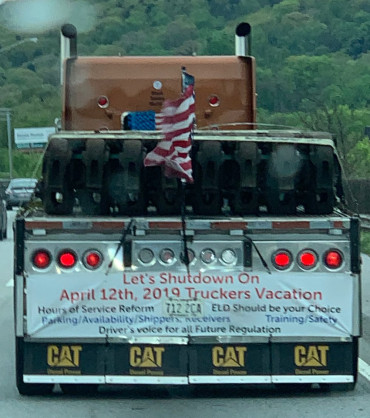 For months, members of a Facebook group named Black Smoke Matters (BSM) have been calling for an industry-wide shutdown, which started April 12, to bring national attention to what the group says is government overreach that is hurting truck drivers’ bottom lines.

The group is calling for truck shutdowns to continue until freight rates improve, or as long as truckers can hold out, said an administrator of Black Smoke Matters.

While the group has more than 26,000 members on Facebook, only about 60 trucks participated in slow rolls or convoys in a few cities, including Chicago, New York City’s Manhattan borough and Springfield, Missouri. One Black Smoke Matters administrator called the participation in the slow rolls “somewhat disappointing.”

“It seems we can’t even get five truck drivers in the same group to agree on anything anymore,” Shawn Link, of Muskegon, Michigan, a Black Smoke Matters administrator, told FreightWaves.

“We may not see the impact of what we are doing until Tuesday or Wednesday if our members can hold out and refuse to haul loads, but we are hoping for a domino effect,” Link, a 30-year trucking veteran said.

“I am close to retiring, but I am doing this for the next generation of drivers,” he said.

In January, the group released its list of demands for the April Shutdown, which called for a massive overhaul of government regulations regarding the trucking industry, which included hours of service (HOS) reform, training and safety standards for all drivers and the need for available parking.

The organization also called for the Federal Motor Carrier Safety Administration (FMCSA) to include truck drivers in the regulatory process and to address costly delays at shippers and receivers that eat into their 11-hours of valuable driving time each day.

It appears the U.S. Department of Transportation (DOT) is listening to drivers’ concerns about addressing flexibility to its HOS rule. Speaking at the Mid-America Trucking Show (MATS), U.S. Secretary of Transportation Elaine Chao announced that the DOT sent an HOS Notice of Proposed Rulemaking to the White House Office of Management and Budget (OMB) for approval last month.

“I can’t give you specifics because it is still in the rules stage, but I can tell you the department understands the importance of giving you the flexibility [to do your jobs],” Chao said at MATS.

One slow-roll convoy of about 20 trucks, organized by Lori Franklin, president of Black Smoke Matters, headed to the FMCSA Field Office in Matteson, Illinois, on April 12.

Once there, FMCSA Administrator Ray Martinez spoke with Franklin and truckers via video conference from the agency’s headquarters in Washington, D.C., regarding the agency’s efforts to move forward with a proposal aimed at increasing HOS flexibility for drivers.

Franklin, who spearheaded the event, was unavailable for comment as of press time about the meeting with Martinez.

Illinois State Police and the Chicago Police Department prevented the same convoy from getting off the highway to drive to Trump Tower in Chicago, according to a Chicago Tribune report.

All three of Janet Sanchez’s company trucks are shut down on April 15. Her company, Lemsi Trucking Inc., is based in Ocala, Florida. She also dispatches another seven trucks, which are also shut down. She and her drivers are protesting low freight rates, the high cost of equipment and repairs and government overreach, which she said is costing her drivers money.

“We are dealing with brokers and the spot market rates are horrible right now,” Sanchez told FreightWaves. “There is a lot of freight to be moved and they need trucks, so maybe this will serve as a wake-up call when there is a shortage of trucks.”

It’s hard to estimate how many truck drivers will shut down in the week-long protest as some said they do not agree with the group’s objectives or will accept good-paying loads if offered.

The regulation went into effect in April 2018, and some small-business truckers say they can’t make money because there is no flexibility in the time they drive. Others see ELDs as a way to increase profits.

“The real reason so many people are upset about this ELD is they can’t lie on their logbooks anymore and it impacts them financially,” Tim Philmon of Middleburg, Florida, told FreightWaves. “With the introduction of the ELD, this is a great time for this device to be used to drive the rates up.”

Since its inception in late 2018, BSM has not been without controversy; some former members have splintered off to form their own statewide groups because of in-fighting.

One former member of BSM, Scott Overmiller of Felton, Pennsylvania, started his own Facebook group, Stand as One Pennsylvania. On Friday, he convoyed with a group of around 24 truckers, down from his estimate of more than 100 trucks, to Manhattan to generate media attention about truckers’ issues.

The group consisted of truckers from Pennsylvania and New Jersey.

“Our goal was to convoy in front of all the major mainstream media networks in Manhattan to gain public awareness of what’s going on in the trucking industry,” Overmiller told FreightWaves. “We wanted the general public to see us and ask us why we are here.”

Another group meets with lawmakers on April 12

Members of the trucker group the United States Transportation Alliance (USTA) walked the halls of Congress instead of shutting down or participating in slow rolls on Friday, urging lawmakers to support two bills introduced by U.S. Rep. Collin Peterson (D-Minnesota). One bill, H.R.1697, would exempt small carriers with 10 or fewer trucks from using ELDs and allow drivers to revert back to paper logs.

“We are trying to advocate with members of Congress about issues truckers are facing,” Brian Brase, USTA director of public affairs, told FreightWaves.

The organization had nine meetings with various lawmakers and industry stakeholders, Brase said.

USTA is not affiliated with Black Smoke Matters, but some of its members belong to both groups.

“We are taking a different path [than Black Smoke Matters] to accomplish our goals,” Michael Landis, chief executive of USTA, told FreightWaves. “We are trying to have positive meetings with FMCSA, lawmakers and other industry stakeholders every month to educate them about some of the issues our industry is facing.”