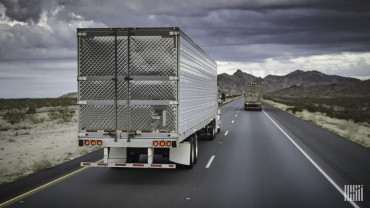 The Federal Motor Carrier Safety Administration will require that rear impact guards be included on the list of items that must be examined as part of annual inspections of commercial motor vehicles.

The final rule, scheduled to be published Tuesday and which goes into effect Dec. 9, follows recommendations from US government Accountability Office  in 2019 and a petition from the Commercial Vehicle Safety Alliance seeking the change.

“While [federal regulations] have required rear impact guards for more than 65 years, they have not been included on the list of components … that must be inspected during the annual CMV inspection,” FMCSA stated in the rulemaking. “This means that a vehicle can pass an annual inspection with a missing or damaged rear impact guard.”

The agency pointed out, however, that because it believes carriers have been voluntarily inspecting rear guards on trucks to remain in compliance with other regulatory requirements, the final rule will not have any major effects on the trucking industry, even for smaller carriers and owner- operators.

A review of comments filed in the rulemaking over the past year reveals that, while neither the trucking industry nor safety advocates took issue with rear-guard inspections, there is concern by both large and small trucking companies about the potential for more pervasive regulations on truck underride guard requirements.

“Operational experience and research have proven that rear impact guards are a critical safety component. The same cannot be said for front and side underride guards,” the Owner-Operator Independent Drivers Association asserted in its comments.

“Over the last several years, [the National Highway Traffic Safety Administration] has considered numerous options involving side underride guards but has consistently concluded federal mandates would be impractical and costly, thus outweighing any perceived safety benefits. Any proposal to mandate side underrides disregards this reality and ignores the safety, economic and operational concerns that have been raised by industry stakeholders.”

The Truckload Carriers Association sided with OOIDA. “A new requirement for side underride guards would present the largest unfunded mandate ever imposed on the trucking industry,” TCA stated in its comments.

“Industry should not be required to adopt and pay for a technology which has not been proven to actually reduce the severity of accidents. Since the cost of this technology is currently very high due to the lack of available options for purchase, the industry and the motoring public would be better served by putting those funds to use on technology like automatic emergency braking, forward collision mitigation, lane departure warning and others which are available broadly right now and which have been proven to prevent an accident from happening in the first place.”

The bipartisan infrastructure bill approved by Congress late Friday includes underride guard requirements. In addition to bolstering the safety of rear underride guards outfitted on new trailers – a provision not opposed by industry – the legislation also requires that the secretary of Transportation conduct more research on the effectiveness of side underride guards.

The bill, which awaits signature by President Biden, also requires that an advisory committee on underride protection be created “to provide advice and recommendations to the secretary on safety regulations to reduce underride crashes and fatalities relating to underride crashes.”