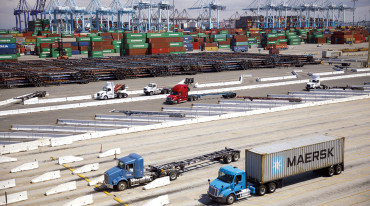 Economists who closely follow the transportation and trucking industry say the next month will be critical as to whether the economy avoids a recession in 2020 as concerns over the spread of the coronavirus mount.

The week of Feb. 24 was the worst for the Dow since the 2008 financial crisis, losing more than 12% of its value. The Dow fell more than 3,500 points, its largest weekly point loss ever.

Economist Noel Perry with Transport Futures told Transport Topics the spreading virus is the type of unplanned event that can derail an economy.

Perry said until recently, he was more upbeat about the economy then he had been last year when he told TT he was concerned about the possibility of a recession in late 2020.

“It wouldn’t take much to kick this economy into a recession where the normal cyclical emotions take over and create what is likely to be a modest recession,” he said. “If this virus turns out to be a bad one, then it will be a big recession because you can imagine what would happen to the economy.”

Perry emphasized that Wall Street is not the economy but, he said, “There’s been a classic overreaction; the stock market has panicked.”

American Trucking Associations Chief Economist Bob Costello said factories and other manufacturing production in China are beginning to come back on line slowly, even as concerns about the virus spread worldwide.

“But, the number of cargo ships sailing from there are down, and imports to the West Coast will fall sharply as a result,” he said. “If the virus gets contained soon worldwide, this decline in imports could actually help clear out a modest inventory overhang in the U.S., especially at the manufacturing and wholesale level.

“In this scenario, a surge in freight from China could hit our shores in a couple of months. But, if the virus continues to spread worldwide, and into the U.S. significantly, it will lead to softer economic numbers here at home. A recession, in this case, is possible.”

The first quarter is going to be a mess; probably, it might even be negative. We’re going to know within two weeks whether there is a supply chain threat in the United States.

Perry said for the trucking and freight industry, the next few weeks will give a clearer indication of what the impact will be on the economy, and he is watching closely the speed at which Chinese factories return to production.

“The first quarter is going to be a mess; probably, it might even be negative,” he said. “We’re going to know within two weeks whether there is a supply chain threat in the United States. We know imports are affected. The Port of Los Angeles is going to have a terrible time the next month. We don’t know yet if supply chains will be affected, but we’ll know in two weeks.”

“The fundamentals of the U.S. economy remain strong. However, the coronavirus poses evolving risks to economic activity,” he said. “The Federal Reserve is closely monitoring developments and their implications for the economic outlook. We will use our tools and act as appropriate to support the economy.”

Costello said if the economy slows dramatically, interest rate cuts might not be enough.

“Unfortunately, with the Fed rightly cutting rates three times last year, there isn’t much ammunition left in the monetary policy gun,” he said.

Rajeev Dhawan, director of the Economic Forecasting Center at Georgia State University, told TT he had been forecasting economic growth of 2% or less this year. He said there is virtually no chance of reaching that level now.

He said parts of China’s economy ground to a halt in mid-February, and it will take several weeks to assess the damage. Compounding the issue is the growth of China’s economy over the past 17 years. In 2003, China was only 4% of the world’s gross domestic product. Today, it accounts for more than 15% of world GDP, and U.S. goods imports from China have increased by nearly 200% since then.

“The disruptions in the transportation side are going to happen in the next 30 to 60 days. Nothing can stop that,” Dhawan said. “They didn’t produce anything in the last two weeks; that means a month from now, there will be no ships coming in.”

Ultimately, Dhawan said that in the U.S. what will determine whether there is a recession is how long the coronavirus lasts and how many people become ill.

“The question is, how does the consumer react here when they get fearful of getting sick, and they’re closing schools, businesses are canceling conferences, people aren’t flying?” he said. “That is a severe disruption on the consumer side. That hasn’t happened yet, and it will determine if this is minor or major. We don’t know.”