Troopers issued over 800 tickets to truckers who ignored travel ban 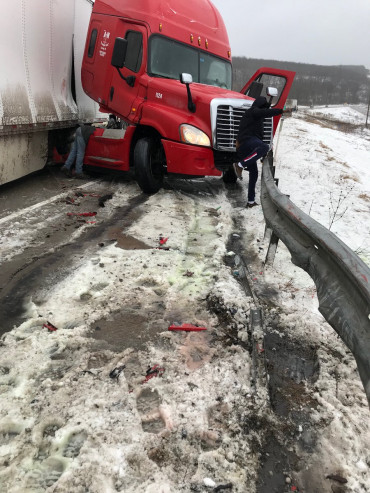 Pennsylvania State Police issued nearly a quarter of a million dollars’ worth of citations to truck drivers during a weather related travel ban earlier this week.

However, a news release from the Pennsylvania State Police (PSP) indicates that many truck drivers did not heed the travel ban — and that they will be paying a heavy price

PSP says that they issued 827 citations and 59 warnings to truck drivers who violated the commercial vehicle travel ban on Tuesday. The fine for violating the travel ban is $300 in addition to court costs, meaning that troopers issued $248,100 worth of tickets to truckers in a single day.

The number of citations issued was only slightly lower than the total number issued during a two day commercial vehicle ban that took place in January at 993.

PSP also reports that there were 47 commercial vehicle crashes on February 12. Seventeen of those crashes happened on interstates where trucks were banned.

“Records show that keeping high-profile vehicles off the roads during the worst periods of inclement weather is an effective way to prevent crashes and keep the roads clear,” said Major James Basinger, director of the Pennsylvania State Police Bureau of Patrol. “Commercial vehicle crashes are a challenge to investigate and clear in any weather. During a winter storm, they can cause significant road closures, which lead to stranded drivers and increased danger for first responders.”