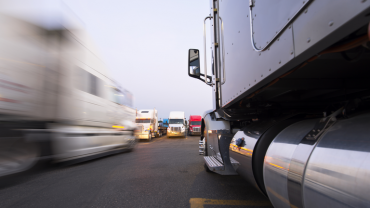 When commercial truckers can’t find a place to park it’s a safety problem for everyone on the road. For more than a decade, the Owner Operator Independence drivers association(OOIDA) has been talking about the truck driver parking shortage and ways to address it, but inadequate truck parking capacity remains a major problem in every state and region across the U.S.

Findings from the National Coalition on Truck Parking, which is spearheaded by the Federal Highway Administration (FHWA), show that major freight corridors and large metro areas have the most acute shortages. Furthermore, shortages exist at all times of day, week, and year but are most prevalent overnight and on weekdays. The National Coalition on Truck Parking includes stakeholders who have an interest in solving the parking crisis, including trucking industry associations and representatives of state governments and law enforcement.

During a recent meeting of the National Coalition on Truck Parking, Bryce Mongeon, director of Legislative Affairs for OOIDA, noted that the association has been working to educate lawmakers on the dangers of the national truck parking shortage as well as the challenges and stress it creates for truckers.

OOIDA has been building support for the Truck Parking Safety Improvement Act in Congress. Also known as H.R. 6-10-4, the bill was introduced by U.S. Reps. Mike Bost (R-Illinois) and Angie Craig (D-Minnesota). This legislation would dedicate hundreds of millions of dollars in existing highway safety funding for truck parking projects through the creation of a competitive grant program. The program would focus funding exclusively on expanding parking capacity, for example, by constructing new truck parking spaces or converting existing space at weigh stations and rest stops.

During the National Coalition on Truck Parking meeting, FHWA presented some of the latest findings from its 2019 Jason's law survey, which is an update of its 2015 report. The Jason’s Law Survey provides a nationwide assessment of truck parking capacity and is a requirement of the Moving Ahead for Progress in the 21st Century (MAP-21) legislation that became effective on Oct. 1, 2012.

Jason’s Law is named in honor of Jason Rivenburg. On March 5, 2009, Rivenburg stopped for a delivery in Virginia and then headed toward a delivery destination in South Carolina. While only 12 miles from the delivery location, he needed to find parking to rest through the night as his arrival location was not yet open to receive deliveries. Rivenburg did not have a safe place to park, but he had learned from truckers familiar with the area that a nearby abandoned gas station was a safe location to park, and he proceeded to park there for the night. He was attacked and murdered at the location while he slept. His killer took both his life and the $7 that he had in his wallet.

Since his death, Rivenburg’s wife, Hope, has worked diligently to bring attention to the national truck parking shortage problem. Her efforts, along with those of family members, friends, and representatives from the trucking industry, helped to push forth legislation to focus national attention on the issue.

After the Dec. 2 coalition meeting, Mongeon told American Trucker that OOIDA heard some good ideas from participants, but that there was a heavy focus on implementing more technology and driver apps that would notify truckers when spots are available. The problem with that is making sure the information available on those apps is updated and available in real time.

“As we look at it, the focus should really be on capacity,” Mongeon said. “There were some other efforts that were talked about, including trying to engage local and state lawmakers in conversations about zoning, land use, and things that could sometimes be an obstacle in expanding truck parking capacity if there is local opposition that might hold up a project.”

“If you have a driver who is tired or wants to take a break or they are coming up on a federally mandated rest break, they need a safe place to park,” he added. “Because of the shortage, if they can’t find a parking space, they are put in a no-win situation and have to decide, ‘Do I pull over and park on the highway shoulder? Do I pull over and take a break? Do I keep driving while possibly fatigued in violation of hours of service rules in order to find a legal parking spot?’ Obviously, that is stressful for the truck drivers, but, more broadly, we are talking to Congress about how this is a safety issue for everyone on the road. If there are trucks parked illegally on the shoulder, that’s a hazard for other motorists.”

Overall, in the five years since the last Jason’s Law survey was done, the truck parking shortage appears to have worsened. The 2014 survey indicated severe problems in three regions and several new regions of concern, including the entire I-95 corridor, the entire Pacific coast region, and outlying areas of Chicago. Additionally, 98% of drivers reported they have had trouble finding safe parking.

“Unfortunately, there doesn’t seem to be much of an effort underway by parking providers – both public and private – to address the problem with new capacity,” Roth told American Trucker. “Most states indicated that they don’t intend to increase capacity, as did 79% of private providers. It also appears that there seems to be a mismatch between capacity location and demand. Whereas 38% of truck tonnage is in 32 urban areas, just 8.5% of truck parking spaces are in these areas. This is likely because land in large urban areas is scarce and expensive, and NIMBYism has likely prevented truck stops from being able to locate or expand in these areas. It’s critical to drivers that they are able to stay in locations where they’re making deliveries (primarily large urban areas) to maximize efficiency.”

The plus side is there is greater awareness and understanding of the problem today than there was a few years ago among stakeholder groups. As a result, many states have begun to look for solutions, including real-time information for drivers, and identification of where shortages exist and why, Roth noted.

“However, federal leadership, including an infusion of federal funds, will be necessary to address the issue,” Roth said.