Inside the mind of a truck inspector 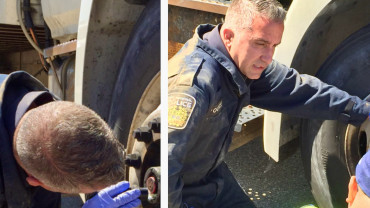 Constable Gianni Parmigiano of the Peel Regional Police was on patrol in the Toronto suburb of Mississauga when a tractor-trailer caught his eye. Something seemed a little odd with the rear license plate.

So Parmigiano, also a commercial vehicle inspector certified by the Commercial Vehicle Safety Alliance (CVSA), decided to pull the truck over. It didn’t take long to see why the license plate had drawn his notice.

“It was written in black Magic Marker,” Parmigiano said.

Parmigiano is one of seven commercial vehicle inspectors with the Peel police. Two officers work per shift, randomly stopping trucks, checking for everything from licenses to hours of service — and roadworthiness.

Parmigiano and his colleagues will be taking part in the CVSA’s annual 72hour inspection blitz, International RoadCheck, which begins Tuesday.

“The inspection we do here is the same we do across Canada, the United States and Mexico,” he said.

A beat with over 2,000 trucking companies

Parmigiano’s police department covers the Region of Peel, the biggest freight hub in Canada and one of the largest in North America. Encompassing the Toronto suburbs of Mississauga, Brampton and Caledon, Peel is home to over 2,000 trucking companies.

Much of the commercial vehicle traffic goes via the Dixie Road exit on Highway 401. Some 13,000 trucks exit onto Dixie each day. Most of the trucks that get pulled over for inspections are owner-operators, Parmigiano said, noting that he tends to find fewer violations among larger carriers.

But there are plenty of exceptions. The truck Parmigiano stopped with the handwritten license plate came from a larger Ontario carrier, which he didn’t name.

Parmigiano came across the tractor-trailer while patrolling Dixie Road in January. He’d never seen anything like that since becoming a commercial vehicle enforcement officer in 2015.

But colleagues have come across other trucks with homespun plates during the past year: some done on cardboard. One straight truck had it written on the rear door.

In Parmigiano’s case, the driver explained the original plate had gone missing and that his carrier believed — incorrectly — that it wasn’t possible to replace it because of the COVID-19 pandemic, Parmigiano said.

“You know, I did a bit of a head shake,” he said. “But with COVID-19, I guess people aren’t sure what they need to do and what the rules are.”

While he understood the driver’s reasoning, Parmigiano still issued a citation. But he was pleased that everything else was in order, and that he did not find any issues with the tractor-trailer itself.

“The truck driver was very professional,” Parmigiano said. “He was very well organized. The pre-trip was completed on schedule; all the documentation was there.”

An auto tech with a badge

Being a police officer wasn’t Parmigiano’s first career. He worked as an auto technician — an experience that helps him on the job as he patrols Peel’s roads. His top priority is identifying issues that pose safety issues for the drivers themselves and the general public.

It starts with a basic visual inspection while he’s driving his patrol vehicle — looking for obvious things like tire and light issues.

“I’m actually looking for defects while I’m driving by the vehicle,” he said. “Sometimes it’s hard when you’re on the road and you’re doing 60 kilometers per hour (37 mph), and you’re trying to see if there’s tread on the actual tires.”

While officers like Parmigiano receive specialized training to inspect commercial trucks — and are trained regularly — he also brings a gearhead sensibility to the work.

“I’ve been doing it so long that I’m using all of my senses — my hearing, my sight — when it comes to commercial motor vehicles,” Parmigiano said. “Because of my background, looking at a tire, I can gauge whether there’s enough tread on it or not, or if there’s some other kind of defect like air leaks from the glandhand section of the truck, or from the actual brake chambers, as we’re slowing down at an intersection.”

When it’s bad, the truck is taken out of service. The most common reason: tires.

“I’ve come across a lot of tires that have zero tread or they actually have cords or visible steel belts popping out of them,” he said.

When an insecure load becomes a missile

Another big issue he commonly deals with: insecure loads. The most dangerous ones tend to involve hazardous materials. Sometimes, Parmigiano comes across containers of compressed-gas cylinders just rolling around in a trailer.

“What I try to tell drivers is, if the valve ever sheared because it struck something in the back because it wasn’t secured, these things turn into missiles or projectiles,” he said. “They’re under pressure; once that valve is sheared, that thing is going through car walls, you name it.”

But beyond looking at issues that pose safety hazards, the auto technician in Parmigiano comes out when he provides tips about minor issues.

“There are things that I point out to the driver that they had no idea about,” he said. “So I’ll advise them, ‘Hey you know … if you do have mechanics on site, just make sure you repair the light or the mirror or so forth, something that’s minor.”

While Parmigiano clearly enjoys his work — his favorite vehicles to inspect are straight trucks — he said he is happiest when he doesn’t find any violations.

“I’m not just out there to hammer the drivers and the companies,” Parmigiano said. “I want to be able to stop you, inspect you and find nothing wrong, and then issue a sticker for your windshield that your vehicle has passed. Because ultimately that’s what we want on our roads, right?”