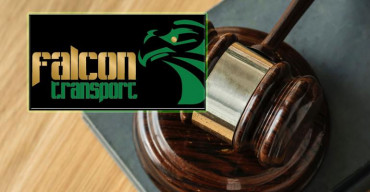 Falcon Transport’s sudden shutdown brings reactions from politicians and others.

It’s a trucker’s nightmare scenario. Driving alone, far from home, when told via email that they are suddenly unemployed and ordered to abandon their truck.

Unfortunately that is exactly how it played out for many drivers who worked for Youngstown, OH-based Falcon Transport Co., which shut down and laid off about 550 employees on April 26.

No reason was given for the closing by Falcon Transport’s owner, Los Angeles-based CounterPoint Capital Partners, which acquired it in October 2017.

Falcon employees all received the following email or text message, with no prior warning:

We regret to inform you that Falcon Transport Co. is not able to continue operations and will be shutting down effective today. Please stop any work you are doing for the company immediately. You are not expected to return to work. Please be on the lookout for further information we will be sending regarding this situation.

Founded in 1903, Falcon was family owned, providing flatbed and OTR services for companies that included GM, Ford and U.S. Steel. One major contract was with GM in Lordstown, OH, which made the Chevrolet Cruze and other models. GM closed the plant in March of this year in a company restructuring that included eliminating the Cruze, Volt and Impala cars.

A class-action lawsuit has been filed by some former Falcon employees, claiming a violation of the Worker Adjustment and Retraining Notification

(WARN) Act requiring firms with more than 100 employees to give 60 or more days’ notice before shutting down. Falcon Transport and CounterPoint Capital are named as co-defendants.

A similar trucking company shutdown and WARN action occurred in March with New England Motor Freight. That lawsuit was settled out of court.

The Asian Mai Show, which posts trucking videos on YouTube, included one on the Falcon Transport situation. Interviews included with former employees were typical of the sad and sudden situation.

“My fiancé worked there as well so we’re both out of work,” she said. “My best friend worked there, and my future mother-in-law, so we’re all in the same boat.”

A lot of Falcon’s drivers worked locally, so they were close to home when they got the news, but not all company truckers were so fortunate.

On the Senate Floor in Washington, D.C. April 29, U.S. Senator Sherrod Brown (D-OH) urged President Trump to stand up for auto jobs in Ohio as Falcon Transport closed. President Trump had promised the Ohio Valley that auto jobs would return to the region.

“This is another example of how our system is rigged. It’s infuriating that this economy continues to gut working-class wallets while management attempts to cut their way to prosperity,” said U.S. Rep. Tim Ryan, (D-OH). “We got bailout money for every bank that wants one, every savings and loan. Every corporation gets a tax cut to the tune of $2.3 trillion, and no one gives a damn about the workers. If we could bail out the corporations that have done everything wrong, we can start helping the workers who have done everything right.”

Reaching out to help

Comments from people seeing the YouTube video included sympathies, information, job offers and more, showing that truckers understand that what happened to Falcon drivers can happen to them. The posts include the following (personal info deleted):