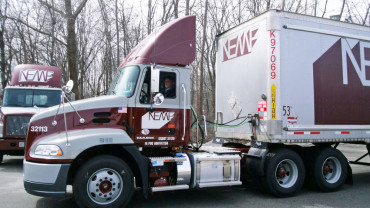 A group of drivers and other employees of bankrupt less-than-truckload (LTL) carrier New England Motor Freight Inc. (NEMF) have filed a class-action suit alleging the company failed to comply with federal law requiring employers with 100 or more employees to give 60 calendar-days notice of plant closings and mass layoffs.

Charles A. Ercole, a Philadelphia-based attorney representing the employees, said approximately 350 drivers and other workers have signed up for class-action status across nearly all of the 15 states and 35 terminals where the Elizabeth, New Jersey-based carrier operated. Ercole said he is seeking class status for all affected NEMF employees; about 3,540 individuals worked at the carrier. The suit demands eight weeks of pay and benefits

Under the “Worker Adjustment and Retraining Notification Act,” a 1988 law more commonly known as “WARN,” all employees would be involved in the suit, even if they didn’t join the class, because all were laid off without sufficient notice, Ercole said in an e-mail today. The suit was filed last Friday in federal bankruptcy court in New Jersey.

Employees entitled to notice under WARN include managers and supervisors, hourly wage and salaried workers. The law also requires that notice be given to employees' representatives such as a labor union, the local chief elected official, and the state dislocated worker unit. NEMF employed about 1,900 workers represented by the International Association of Machinists. Many of those were drivers

The WARN Act allows for various exemptions from the advanced-notice requirement. However, Ercole said the company has given no valid reason under the law that would allow it to avoid the requirement. Vincent Colistra, an executive at restructuring firm Phoenix Management who was hired late last year to restructure NEMF’s finances, did not return a request for comment.

NEMF stunned the transportation industry late on February 11 by announcing it had filed for protection under Chapter 11 of the federal bankruptcy code and would begin an “orderly wind-down” of operations. Employees began getting laid off last Friday, February 15. About 90 percent of all workers are expected to be terminated by the first week of March, according to last week’s bankruptcy filing. A small percentage of workers would remain to oversee the wind-down and closure of the business, the filing said.It is unclear when NEMF will officially close its doors; the company was expected to complete deliveries of all freight by early March.