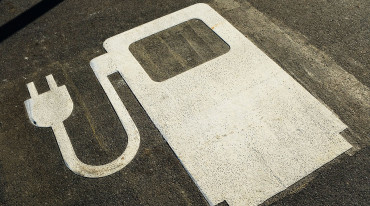 Germany opened the first stretch of a so-called electric highway that will connect hybrid trucks to overhead wires, allowing them to recharge while traveling on the country’s main transportation arteries.

The 6-mile stretch south of Frankfurt on Germany’s A5 autobahn was opened last week, the German state of Hesse said in a statement. One truck is using it, with four more planned by 2020.

The system was built by Munich-based engineering firm Siemens AG, while Volkswagen AG’s Scania trucks unit provided the vehicles. It uses technology similar to trains or trams, allowing trucks to link on while driving at about 56 mph, drawing power from the wires above. The electricity charges up the trucks’s battery, allowing it to drive electrically for a while afterward, with a diesel motor kicking in once the battery is depleted.

Siemens started the project in 2010 with a test track outside Berlin. The first complete track opened in 2016 outside of Stockholm, and the company is working on another in California.

Siemens’s mobility division, which makes trains and signalling equipment, recently had its attempt to merge with French competitor Alstom SA blocked by the European Commission. CEO Joe Kaeser has said he envisions the unit expanding from trains into a wider range of mobility topics such as electric and autonomous cars.