Truck drivers' salaries are experiencing an 'unprecedented' jump, but it's not enough to end the driver shortage that's making everything more expensive 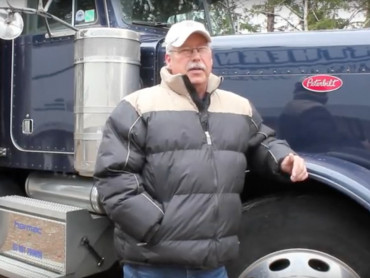 Jay Sidor quit his job hauling produce from Canada to Los Angeles. So did 50 of his coworkers.

They were protesting the electronic logging device (ELD) mandate, which went into effect in December. The mandate requires truckers to keep an electronic log in their cabins to ensure they don't work for more than 14 hours a day or drive more than 11, in accordance with the hours-of-service law. As drivers are paid by the mile, driving less ostensibly slashes their pay.

"I was in the position to lose around $1,800 a month," Sidor told Business Insider.

But now that law is working in his favor. Because many truckers are working less in accordance with ELD, it's caused a labor shortage and for some salaries to go up. Sidor and most of his coworkers are back at work with a 15% pay increase.

Drivers' salaries are seeing "unprecedented" jumps, Gordon Klemp, principal of the National Transportation Institute, said. But analysts say the increases aren't enough to make up for the drop in drivers' real wages since the 1970s and '80s. According to a Business Insider analysis of Bureau of Labor Statistics data, truckers' hourly pay, when adjusted for inflation, has dropped by as much as 35% in some places.

"Wages are so far below what they need to be that we're having issues finding drivers," David Ross, managing director of the St. Louis business bank Stifel, told Business Insider.

And as the driver shortage continues, the costs are being passed along to retailers and consumers. Food manufacturers like General Mills, Hormel Foods, and Tyson Foods said earlier this year that they would raise the cost of some products to offset rising shipping costs.

"Driver pay is going up pretty rapidly across the board," Andrew Lynch, the cofounder and president of Columbus, Ohio, supply-chain company Zipline Logistics, told Business Insider. "We've definitely seen spikes before, but nothing like what we're experiencing now."

Total compensation numbers have increased by 10% to 12% since June 2017, Lynch told Business Insider. Nearly 50% of all drivers in the National Transportation Institute's quarterly survey on trucker pay received pay bumps in 2018. Last year, only 11% did.

A history of decline

Not all drivers have experienced the sort of double-digit pay jumps that truckers like Sidor enjoyed this year. Lenny Oppelaar, who started trucking after he graduated from high school more than 40 years ago, is paid less now.

But now, as a line-haul driver for XPO Logistics, one of the world's largest logistics companies, Oppelaar earns about just under $25 an hour, he told Business Insider.

Business Insider compared freight wages, adjusted for inflation, from the BLS 1980 area wage survey and location-specific wage estimates from the BLS' Occupational Employment Statistics. For the five cities in which comparable data existed in both surveys, wages decreased by 21%, on average.

Other studies have found more drastic drops. Michael Belzer, an economics professor at Wayne State University who studies the freight industry, estimated that base compensation for long-haul truck drivers is down 50% in real terms from 40 years ago.

"To be able to be a truck driver used to be quite a good blue-collar, middle-class job, but over the past 40 years, it has kind of dwindled away," Klemp said.

Many truckers and analysts point to the Motor Carrier Act of 1980 as the starting point when trucking wages ceased to keep up with inflation. That law, passed by President Jimmy Carter, deregulated the trucking industry.

One of the results of the 1980 legislation was a highly fragmented industry in which "destructive competition" has kept freight rates low, University of Pennsylvania professor Steve Viscelli wrote in "The Big Rig: Trucking and the Decline of the American Dream."

Klemp added: "It's just been super competitive, because there's just been a glut of drivers and capacity, so shippers have enjoyed the ability to bid and rebid their freight on a continual basis."

This year's salary increases have been considerable, but they're not saving the industry

Driver pay would need to jump by 40% to 50% to attract new workers, Ross told Business Insider. But increases have occurred in the 10% to 12% range this year.

"All these near-term pay increases are not attracting anybody new into driving the truck industry," Ross said.

The American Trucking Association estimates the industry will have a shortage of 175,000 drivers by 2026 if the industry makes no changes. The term "driver shortage" has been recited for decades by the trucking industry, but experts say it's now reached a peak. Turnover rates are now 95%, Lynch said.

"They're in such high demand that a driver can quit his or her job for any reason and have a job essentially waiting for them the second they decide to look," Lynch told Business Insider. "Trucking companies are in constant recruitment mode."

That's because other industries, particularly construction and energy, are attracting the sort of blue-collar workers who would normally go into truck driving, according to Mark Montague, senior industry pricing analyst at DAT Solutions. Those jobs have better pay without the challenges of trucking, and employees can be homeevery night.

But the biggest cause for the driver shortage, analysts said, is the low pay.

"Driver pay has not gone up at the same rate as trucking prices have gone up," Lynch said. "That's a big part of why we're such in a crisis right now."

Montague said companies would continue to pass on the increasing price of shipping to customers.

"Costs have ratcheted up sharply, and it's causing a lot of pain, consternation, and speculation," Montague said.