Will truck drivers use the new HOS split-sleeper provision? 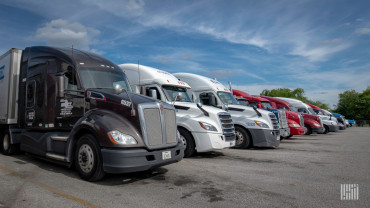 As Tuesday of this week came and went, truck drivers gained several new benefits from changes to hours-of-service (HOS) regulations. One significant change is the split-sleeper berth exception.

Tuesday’s change is not technically new to the HOS regulations but rather an addition to the existing rule. Previously, drivers could utilize a split-sleeper berth exception in an 8/2 split. The new option adds a 7/3 split.

It’s unclear how many drivers utilized the provision before, and it’s even more uncertain how many will use the new option.

Adjustments to the 30-minute break and split-sleeper use could boost driver productivity and reduce violations.

“If the driver is properly trained on the split-break exception and is using an ELD (electronic logging device) that has split logging built into its rule set, the odds of the driver making an error and receiving a citation are fairly low,” Tom Bray, transport industry consultant for J. J. Keller & Associates Inc., told FreightWaves this summer. “Another way to put it is that using an ELD with the split-logging exception can prevent violations if a carrier allows its drivers to take advantage of the flexibility split logging provides.”

Drivers using the split would be able to take “their required 10 hours off duty in two periods, provided one off-duty period (whether in or out of the sleeper berth) is at least two hours long and the other involves at least seven consecutive hours spent in the sleeper berth,” the Federal Motor Carrier Safety Administration (FMCSA) said.

Neither period can count against the 14-hour driving window. Many drivers did not benefit from the 8/2 rule because of its complexity, but the addition of a 7/3 option may be more enticing. It could, however, further confuse drivers who previously struggled with 8/2 split compliance.

“The new split sleeper is even a bit more complicated than the earlier rule, mostly because a driver does not have to count either the long sleeper berth period or the shorter break in their daily 14-hour calculation,” she said.

ELDs should have been programmed for the change, Sandberg said, but “each ELD manufacturer likely has their own twist on how they would notify a driver of a violation or how their hours are being calculated.”

FMCSA continues to study ways to make a split-sleeper provision more beneficial for drivers. In August, the agency published a proposed Split Duty Pilot Program in which participating truck drivers would have the option to pause their 14-hour driving windows with off-duty periods lasting between 30 minutes and three hours. This is a separate initiative from Tuesday’s changes.

Sandberg noted potential problems drivers could face with the new changes include compliance issues if a driver relies on an ELD for managing hours and the device manufacturer has either not programmed in the changes or done so incorrectly. Secondly, drivers who do not have a sleeper berth can’t use the split-sleeper provision even if they are on the road for days at a time.

“I suspect some drivers will simply try to record time as sleeper even though they do not have a sleeper berth,” she said. “Also, you cannot use the new sleeper berth rule to try to extend your 14-hour day [when] the longer of your two breaks is ‘off duty.’ The longer of the two breaks must be in the sleeper berth.”

Sandberg said drivers and carriers should request specific documentation from their ELD providers to understand how their systems calculate the rules and how they warn the driver of a potential violation before it happens. Carriers need to ensure all drivers are trained in the provision, she added.

“I used to say you are always better off just taking a solid 10 [hours] off duty and then you don’t have to worry about making a mistake and being put out of service,” Sandberg said. “However, I understand that for drivers out on the road, this new provision will help them by getting rest with the shorter break and then they can still get the rest they need with at least seven hours in the sleeper.

“The big thing is if a driver wants to use the new rule to extend their 14-hour window – make sure the longer break is in the sleeper and the two breaks together equal 10 hours,” she added. “They still are not allowed to exceed 11 hours of drive time and they need to be watching how their drive time is calculated within that 14-hour window.”