Truckers spot state police rolling in their own big rig 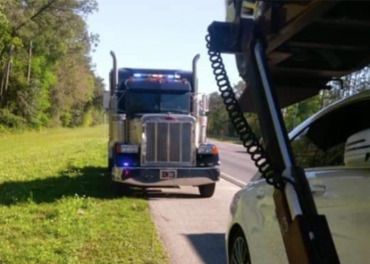 Online trucking communities have recently been stirred up by images of Florida troopers stealthily patrolling in their own big rig, but it turns out that they — and other law enforcement agencies — have been using semi trucks to hide in plain sight for years.

A pair of posts featuring a Florida Highway Patrol big rig have been shared in many trucking groups in the past week.

Another Facebook post surfaced around the same time of the FHP’s big rig pulling over what appears to be the same car hauler on a Florida roadway.

Many Facebook users expressed shock, confusion, and amusement at the FHP’s use of a commercial vehicle to catch drivers behaving badly.

While the photos have generated a mixture of surprise, anger, and applause in online circles, the FHP semi truck is nothing new.

According to a report from the South Florida Sun Sentinel, the FHP has been using their own semi truck since 2014 for various enforcement activities. Typically, the trooper inside the truck acts as a spotter who contacts other officers in cruisers once he spots a driver who is speeding or texting or engaged in some other form of violation so that they can perform a traffic stop. The FHP big rig has often been used as an enforcement tool during the agency’s statewide Ticketing Aggressive Cars and Trucks, or TACT safety blitzes.

FHP Sgt. Christopher Galante said, “Believe it or not, people will pass this truck, although it is marked as one of our units. It is amazing what people do around [tractor-trailers].”

And Florida isn’t the only state where troopers patrol in their own semi trucks.

The Tennessee State Patrol has had their own custom Peterbilt for several years. They use it both as an education tool and in their enforcement efforts. And many state police agencies that don’t have their own custom truck have been known to borrow one for “Trooper In A Truck” enforcement efforts.