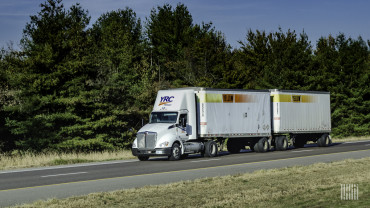 More than once on its second-quarter financial call, less-than-truckload (LTL) carrier YRC Worldwide’s (NASDAQ: YRCW) management team used the words “once in a lifetime” to describe the opportunity afforded them through a controversial $700 million Treasury loan the company received in early July.

The excitement largely centered on Tranche B of the agreement granted under the Coronavirus Aid, Relief, and Economic Security Act (CARES Act): a $400 million loan allowing it to refresh its rolling stock. Management plans to start replacing the oldest tractors and trailers across all of its separate companies first. They provided a rough savings estimate of $10,000 per tractor annually. Maintenance costs on some of the older equipment the company is operating can range from $11,000 to $12,000 a year, a far cry from the $1,000 to $2,000 spent to keep first-year tractors moving.

Management believes cost headwinds from leasing equipment versus owning amount to approximately 300 basis points. Other factors include improved fuel mileage and vehicle up time. Also, a good portion of the company’s assets don’t have the newest technology and lack sophisticated collision-avoidance features, which management believes will lower insurance expense over time.

After the market close on Monday, the Overland Park, Kansas-based company reported a second-quarter loss of $37.1 million, or $1.09 per share, compared to consensus estimates ranging from a loss of $1.38 to a loss of $1.66 per share.

YRC plans to phase in new equipment as quickly as possible but noted it would take four to six quarters to spend the entirety of the loan as they will have to coordinate with original equipment manufacturers’ (OEMs’) build schedules. YRC hasn’t yet used any of Tranche B, which raised some questions on the call as to whether or not the government could pull the deal.

A July 20 report from the CARES Act Congressional Oversight Commission called into question many aspects of the loan to YRC including the validity of the company’s national security designation; the fact the carrier was struggling for years prior to the pandemic; a “strikingly higher” level of risk taken on the loan compared to recent debt issued; and an interest rate 4 percentage points lower than the carrier was able to negotiate during its last financing.

Management responded that the panel was fulfilling its duty of Treasury oversight. “We don’t see any reason why we wouldn’t get that fully funded between now and when we need to exhaust all $400 million of it,” said CFO Jamie Pierson on the call.

YRC has used $245 million of the $300 million allotted in Tranche A of the agreement. That money is slated for the repayment of deferred health, welfare and pension payments.

CEO Darren Hawkins expressed appreciation to Congress and the administration for passing the CARES Act. “It has been a long time since this company has had this much runway in front of us, and we intend to capitalize on every single day,” said Hawkins.

YRC has amended its credit agreement, which waived the adjusted earnings before interest, taxes, depreciation and amortization (EBITDA) covenant until the end of 2021. At that time, the carrier will be required to generate last 12 months (LTM) adjusted EBITDA of $100 million. The covenant will increase in steps to the prior requirement of $200 million by the end of June 2022.

YRC reported LTM adjusted EBITDA of $183.1 million at the end of the second quarter.

In addition to the covenant waiver, the carrier has more than three years before any major debt maturity. However, YRC will be required to maintain liquidity of $125 million until $200 million in adjusted EBITDA is achieved. The company reported liquidity of $302.6 million at the end of the second quarter, not inclusive of the new lending agreement.

YRC reported debt of $909.8 million and cash flow from operations of $213.6 million at the end of the quarter. Given the company’s new liquidity position, the “going concern” designation has been removed from financial filings.

YRC reported a 20.2% year-over-year revenue decline to $1.015 billion as LTL tonnage fell 14.8%, with revenue per hundredweight, or yield, excluding fuel surcharges declining 2.6%. Management noted continued improvement in the tonnage declines as the quarter progressed. Tonnage declined 22.6% year-over-year in April, 14.5% in May and 8.6% in June. July tonnage was only down 4% compared to July 2019. The company has been recalling furloughed employees and referred to the pricing environment as stable.

Referring to the $700 million lifeline, “we did it again,” said Pierson. “Now it is time to execute.”

Shares of YRCW are up more than 35% in after-hours trading.