Mazda shuts down plants as cargo flights from Shanghai dry up 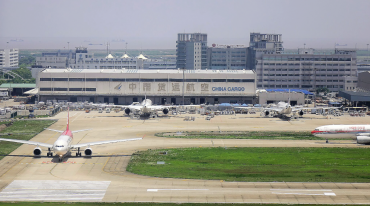 Many freight forwarders have stopped accepting bookings for Shanghai and are trying to divert flights under their contractual control to other airports, some of which have their own pandemic restrictions in place, adding to transit times.

Difficulty moving exports out of China’s main cargo airport comes as peak shipping season for back-to-school and holiday products kicks in, but the ripple effects are widespread. Mazda Motor Corp. this week said it has suspended operations at Japanese manufacturing plants in Hiroshima and Hofu until Friday due to the uncertainty about the resumption of air cargo services.

Flexport, a freight management company based in San Francisco, planned to resume a dedicated charter flight operated by Atlas Air this weekend after securing one of the few remaining ramp slots at the cargo terminal, but it got yanked Thursday morning after the positive test, said Neel Jones Shah, the global head of air cargo.

Shanghai International Airport Services, which handles ground operations for major cargo carriers such as Air China, Qatar Airways and Cathay Pacific, has now isolated its entire staff on the freighter side of the airport, he said.

Flexport contracts with Atlas Air  for three weekly cargo flights from Shanghai to Los Angeles. It has shifted two of the flights to Hong Kong and is trucking the freight there while implementing contingency plans for September.

“This is not a couple-of-days sort of event. We feel that this cycle could repeat itself,” Jones Shah said in an interview.

SIAS partially locked down its terminal last Friday after several positive COVID tests among its workforce. The capacity reduction exacerbated scaled-down work levels at several airports as China copes with a resurgence of COVID-19. Cargo efficiency at Shanghai Pudong airport (PVG) was already severely degraded by a “7+7+7” policy under which airport personnel work for seven days, quarantine in a hotel for a week and quarantine at home for a week. All-cargo airlines canceled hundreds of flights to avoid lengthy loading delays that jeopardized the loss of pilots using up their duty hours and being subject to strict Chinese quarantine rules. Some flights have left without cargo.

China’s zero-tolerance policy over COVID led to similar closures of major port terminals in Shenzen and Ningbo this summer.

Freight forwarder EFL Global said in a market update for customers that 80% of flights from PVG were canceled this week and that it expects 50% will be scrubbed over the next two weeks — but that was before the latest COVID case was detected.

Qatar Airways, Air Bridge Cargo and Polar Air Cargo, a joint venture between Atlas Air and DHL Express, have diverted shipments to Guangzhou, Zhengzhou and Shenzhen Bao’an airports, Everstream Analytics said in a report. American Airlines and Air Canada have canceled passenger freighters to Shanghai, according to their cargo websites. Etihad Airlines and Lufthansa Cargo have also canceled all flights departing from the airport, but a Cathay Pacific spokesperson on Wednesday said the carrier has resumed most freighter operations.

China Eastern Airlines and China Southern Airlines had previously canceled many U.S.-bound flights from PVG due to the operational impact of COVID protocols.

Flexport, in response to the mounting congestion early this month, embargoed freight from the U.S. to Shanghai flying on its reserved Atlas freighters to minimize the risk of export cargo not being loaded in time. It notified customers in a message that transit times from Shanghai to the U.S. have been extended five to seven days by the ground delays. EU destinations are delayed two to three days.

Shippers were already wrestling with limited aircraft supply prior to the new outbreaks.

Airfreight capacity has been in a deficit since the pandemic started last year, but temporarily decreased further this month when some carriers took advantage of the European holiday season and lower demand to put aircraft through major maintenance cycles they had postponed because of the nonstop business, Castle added.

Freightos, a digital booking platform for international shipping, says rates from PVG to the U.S. have jumped 15% to 25% in the past week, double the level from a year ago, because of the aircraft supply shortage. Spot rates have increased 12% to 15% to European destinations. Freight buyers say they are paying $10.50 per kilogram, or more, for dense freight and expect airfreight out of China will soon approach $15 to $20 per kilogram, although lighter freight priced with a volumetric formula is less. The last — and only time in memory — rates were that high was in May 2020 when passenger airlines completely grounded flights at the same time governments and hospitals were placing emergency orders of COVID medical gear.

SIAS, jointly owned by the Shanghai Airport Authority, Air China and a couple of ground handlers, has not indicated when cargo operations will fully resume, but extensive freight backlogs at the terminal and shipper facilities mean bottlenecks are likely to persist for at least a couple of weeks after the return to normalcy.

Everstream Analytics advised shippers to use airlines still operating out of PVG such as Cargolux, Nippon Cargo, ANA, Kalitta Air and SF Express, which rely on unaffected ground handlers. Many carriers, however, are booked solid and may not have the space for new customers.

Jones Shah, a former cargo chief at Delta Air Lines said he can’t count on a quick turnaround in Shanghai.

“You have to give your customers stability. You have to tell them what the plan is for the next two weeks, or four weeks. And whatever the plan is, people want to see a plan. They want to know that we’re not just operating at the edge of chaos all the time.