Are attacks on truckers and their rigs more common now? 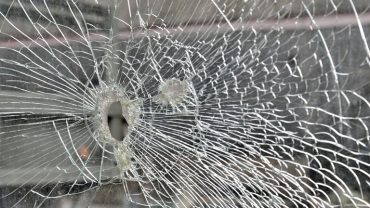 Over the past year, social media sites frequented by drivers have featured incidences of attacks against trucks. The attacks are few and far between, according to authorities, but that is little consolation for the drivers caught in the crosshairs.

Dennis Gilbert was driving his flatbed loaded with trees along the New Jersey Turnpike returning to his landscaping company in Piscataway, N.J., when something on the overpass caught his attention. As he got closer to Mile Marker 5, he noticed “funky-colored” lights on a pickup truck. He saw several guys and thought it was odd because it was March 26, the pandemic was in full swing, and the roads were empty. Not many people were out, especially at around 11 pm.

"I'm thinking: 'Why are these guys even up there?' he told American Trucker. "As I got to the overpass, I was looking at them when, all of a sudden, a brick or something heavy like it came crashing through the windshield. I had no idea what it was. I thought I had hit a car."

Gilbert went blind and blood drenched his face. Instinctively, his 15 years of driving experience kicked in as he struggled to inch his truck to the side of the road. "I was blinded. I fought to get the truck over to the side without crashing."

Luckily, another trucker came to his aid, told him what he saw hit his windshield—a cinderblock—and began dumping water into his eyes. Gilbert was rushed to the hospital where a physician picked glass shards from his eyes.

"It was really bad. I wasn't seeing well for the first couple of days at all. It's better now, but I have dry eye worse than I ever did before,” he recalled.

Over the past year, social media sites frequented by drivers have featured similar incidences of attacks against trucks, including gunshots as well as projectiles thrown from overpasses and roadsides. While the photos are horrific and the aftereffects to drivers sometimes cause permanent physical and mental damage, there doesn't appear to be a rampant nationwide assault on drivers and their rigs.

Because each instance is handled locally or statewide, there is no nationwide repository of such cases, only disparate anecdotes. Interviews with several state police officials did not find any indication of conspiracies against truckers from civil unrest, the pandemic, or any other reason suggested in some posts.

One indication that the incidents are rare comes from Max Farrell, CEO of WorkHound, a company whose app collects anonymous reports from truck drivers and those in other industries with the aim of improving employer-employee relations.

Farrell explained that his group has not seen any uptick in driver complaints about violent attacks due to the pandemic or anything else.

"I checked with our team about the chatter that we've been hearing in regards to unrest and relevant concerns,” he said. “The takeaway is that there is a vocal minority that continues to raise similar concerns, but it tends to be the same small group of people that raise concerns time and time again.”

Still, Farrell said that these responses are worth paying attention to, as are other concerns. "But there hasn't been a substantial number or more than usual. I think this alludes to the age-old concept that the squeaky wheel gets the grease. If people continue to raise concerns about an issue, it's going to get attention, even if a significant number of people may not share that same concern."

"You can go on social media and look at Facebook groups focused on truck drivers, for example, and people will feed off of each other, and these sorts of issues can catch on like wildfire,” he added. “I think in certain circles, it's going to be a much bigger issue. But from our perspective and the data we're seeing, it hasn't been significant."

The fact that these attacks are few and far between, is little consolation to Irwin Brown Jr., who witnessed a bullet shot through his tanker truck windshield on June 19 on I-520 off exit 9 in Augusta, Ga.

"I was just riding down 520 and heard my windshield shatter and glass hit me in the face," he said. "I really didn't know what it was until I opened my eyes again and noticed it was a bullet hole. I just kept riding until I got to a truck stop and called the cops."

At first, authorities on the scene suggested that the shot may have been a stray hunter's bullet, but Brown dismisses that early notion.

"It was a straight-on shot, not from my left or right like from a hunting area. It probably came from a [nearby] bridge," he said.

Brown knows about being a target. He was a military driver who saw action in Iraq and Bosnia. "I've been shot at, but this is a lot different. There, the bullet hole pings off the armored vehicle, but here it actually comes straight through your vehicle," he explained.

He considers himself lucky that the bullet didn't penetrate the tank especially because it was empty, which could ignite lingering fumes.

Brown has only been driving in the civilian world for a year and noted that his company was surprised at what happened.

"I don't think a lot of trucking companies have a protocol for shooting," he said. "They have protocols for everything else, but a shooting is something that's very unexpected. I've got a little anxiety going back to North Augusta, but that's the job and you got to do it."

The official report from the Richmond County Sheriff logged the incident as "Terroristic Threats and Acts." The investigation is still open.

As for Gilbert's case, New Jersey State Police on April 10 charged three male juveniles with aggravated assault, criminal mischief, and disorderly conduct. Due to COVID-19 restrictions, the juveniles will be processed at a later date. They were found partly because of the distinctive blue lights on their truck, which Gilbert had described to the police as “funky colored.”

"I still drive, but I definitely slow down before bridges, and I always look up to see what's going on,” he said. “The incident shook me. It shook me bad."