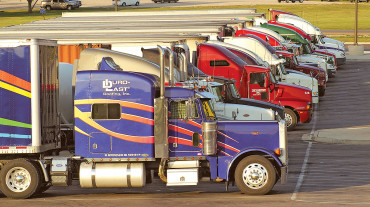 Low wages may be more responsible for high driver turnover than a lack of qualified workers to supply the trucking industry, according to a study released by the U.S Bureau of Labor Statistics (BLS).

The study, co-authored by Kristen Monaco, an associate commissioner at BLS, and Stephen Burks, an economics professor specializing in trucking at the University of Minnesota-Morris, calls out the American Trucking Associations (ATA) specifically for promoting the driver shortage theory, noting that ATA “has been arguing systematically since 2005 that firms hauling freight face a shortage of truck drivers,” along with the potential effects on the larger economy.

Results of the BLS study reveal, however, that higher earnings in truck driving increase occupational entry, especially among those willing to work longer hours for more pay. “Accounting for the fact that hours tend to be relatively high in truck driving, we find nothing surprising about how economic incentives appear to work in this labor market,” the authors contend, finding also that driving a truck is a relatively stable occupation compared with similar blue-collar jobs.

So what explains truckload (TL) carriers’ high turnover? “Arguably, the long-distance TL segment has high levels of competition, similar average costs across all scales of production, and a very limited ability to differentiate prices in the product market,” according to the study. “These characteristics result in labor market conditions in which individual firms are forced to accept high turnover as a cost-minimizing response to their competitive position in the market for their outputs.”

The study further points out that managing driver recruitment and retention becomes harder when the industry has lagged in pricing response to surges in demand, “because much TL freight moves under contracts, and aside from a spot market, freight rates do not adjust upward quickly.” It said the lag in response to driver demand occurred twice after the 2008 recession, in 2014 and in 2018.

The ATA was not immediately available to respond to the BLS study. In the past, the association has cited age, gender, lifestyle choices, and federal and state regulations that reduce productivity as primary reasons for the shortage. To fill the employment gap it has supported proposals such as lowering the age for an interstate commercial drivers’ license (CDL) and making it easier for a CDL upgrade.

The Owner-Operator Independent Drivers Association believes the BLS study supports its persistent message – that a shortage wouldn’t exist if drivers were better compensated for their work. “We have stated many times that the notion of a truck driver shortage is a myth. It’s been talked about for decades, and yet little has changed as far as pay.”

The BLS report notes that in the first quarter of 2010, in the wake of the 2008 recession, the annual turnover rate at large truckload carriers bottomed at 39 percent – and that at small TL carriers hit 35 percent, both of which are still very substantial percentages by the standards of blue-collar occupations.

The ATA’s latest driver turnover statistics, released March 13 for the fourth quarter of 2018, found that driver turnover continued to trend down in the truckload sector. The rate fell nine points to 78 percent at larger fleets (more than $30 million revenue) compared with the previous quarter, and is now 10 points lower than it was during the same quarter in 2017.

“The overall trend late last year was that turnover is slowing,” said ATA Chief Economist Bob Costello. “There can be various reasons for this – either freight volumes are decelerating and as such fleets pulled back on recruiting efforts, or fleets’ efforts to increase pay are paying dividends in the form or reduced turnover. The truth probably lies somewhere in between, but it is a trend worth watching.”