How a Future Truck Will Intelligently Adapt to Its Drivers 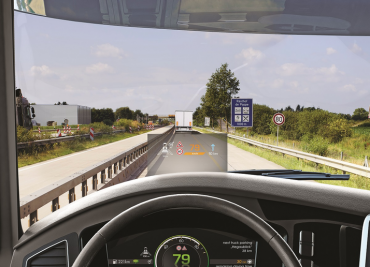 It’s a crisp, clear, spring morning in the not-too-distant-future when a young driver named Jamal arrives for work in the pre-dawn. Climbing out of the autonomous, shared-ride car that brought him to the terminal, Jamal checks his smartphone to get the vital information on how he’s going to spend his day — the truck number he’s assigned, his cargo, his routes, his delivery destinations and scheduled arrival times.

There’s no need to walk into the terminal to clock in or check in. Jamal’s phone has notified his dispatcher that he’s on the premises and about to begin his day. So Jamal walks out to the yard and finds his assigned truck.

After climbing in, Jamal holds for a second in front of the dash to allow the truck’s facial recognition camera to capture his image. Once the vehicle confirms it is, in fact, Jamal sitting behind the steering wheel, with a push of a button, the truck engine starts right away.

While the diesel engine warms up, the truck’s on-board computer syncs with Jamal’s virtual assistant, which he named Marcus, in honor of his truck-driving grandfather. The assistant exists as a complete virtual entity that syncs to, and communicates to the world at large, via Jamal’s smartphone.

Taking its instructions from Marcus, the truck computer begins configuring the cab and all of the vehicle’s operational and performance parameters to Jamal’s preferences. The dash center cluster in front of him arranges its digital speedometer, transmission indicator, and tachometer in exactly the places Jamal wants them. The advanced safety system and smart cruise control load Jamal’s preferred settings, warnings, and audio levels, while the rear- and side-view cameras sync with the truck’s facial recognition camera and intelligent driver’s seat to automatically adjust their views and comfort settings to him. And while all of this is going on, all the day’s trip information — including route maps complete with real-time traffic flow, accident reports and weather updates — loads into the large display screen in the truck’s center dash section. This happens every time Jamal climbs into a new truck, regardless of the vehicle’s make and model.

All this happens in less time than the truck’s engine takes to warm up, and requires little or no inputs from Jamal, unless he cares to tweak some of the settings or make a course correction to his preplanned route.

Once done, Jamal pulls out of the yard, into traffic and starts on his way. Normally he likes to listen to talk radio in the morning. His favorite, preset stations were loaded into the truck’s infotainment center along with all of his other data, but this morning, Jamal is in the mood for some old school jams. “Marcus,” he says, noting the flash of light on the dash, telling him his virtual assistant is alert and listening, “play Jay-Z’s greatest hits.” And as his cab fills with the beat of classic hip hop, Jamal merges onto the freeway and gets down to the business of trucking. 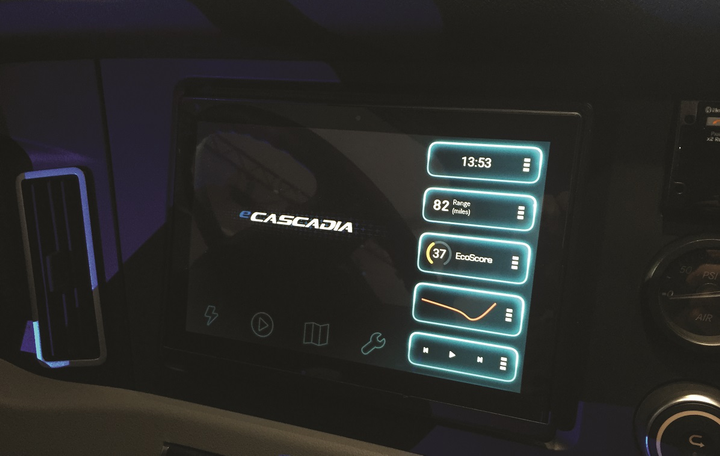 The “human-machine interface,” or HMI, is getting a new look in electric vehicles such as the Freightliner eCascadia.

A few years ago, Jamal and his smart truck interior would’ve sounded like something out of a science fiction movie. But today, given the quicksilver changes coming at society, trucking, and individuals, that scenario doesn’t sound so far-fetched.

“I would love to have a tablet display screen and a personalized truck cab like that,” says Jamie Hagen, the owner and chief driver of Hellbent Xpress, a small fleet running out of North Dakota. Hagen is a Mack fanatic, who has a promotional deal with the OEM. He’s an admitted “technology guy,” who uses social media to talk about his experiences from trucking’s technology frontier. “There would be a huge value to having a vehicle that configures itself the way you want when you climb up into the cab,” Hagen says. “It would be a big quality of work and life improvement for the slip-seat guys driving for fleets. And for an ‘information guy’ like me in my own truck — I’d be in heaven with all the information at my fingertips, presented the way I wanted it.”

As far as Hagen is concerned, information is the future of trucking. “Every aspect of it comes down to information,” he says. “From where a load is and when the receiver can expect it, to the way my gauges are configured. And I want to customize that data: I want to know how much weight is on each axle, what my engine temperatures and pressures are, and what my exhaust system regen possibilities are. We have thousands of sensors on these trucks today, capturing data. But we’re still not doing a good job getting that data out to the people who need it, in the ways they want to receive it. I think smart driver-vehicle interfaces will be a huge step forward in making those things happen.”

And Hagen isn’t alone in his assessment. Hyliion is making a name for itself as a developer of “smart” mild hybrid drive systems for Class 8 tractors. But early on, says Thomas Healy, the company’s founder and CEO, he and his engineers realized that a modern system of relaying information to the driver about how a truck is performing and why is an essential component for optimal efficiency and performance from both the man and the machine.

Hyliion engineers are deeply involved in the development of personalized display systems that use a Bluetooth app to sync a driver’s preferences to a vehicle. “As soon as a smartphone goes into a vehicle, its computer knows who that driver is and what their preferences are,” Healy explains. “And once the driver is in place, we can use that app to help coach him or her while we ‘gamify’ the driving experience from a fuel economy perspective.”

That’s because one of Hyliion’s selling points for its technology is enhanced fuel economy. But the best technology in the world can’t overcome a driver who doesn’t know — or care — how to make the best use of it. Which is why the company is investing so much time and money in getting the interface between the driver, the truck, and the technology right.

“We want to set up a system where we can reward drivers day in and day out — regardless of what truck they are in — for good fuel economy performance. The only way we can make that a reality over a long periods of time is with a smart interface between the truck and driver.” 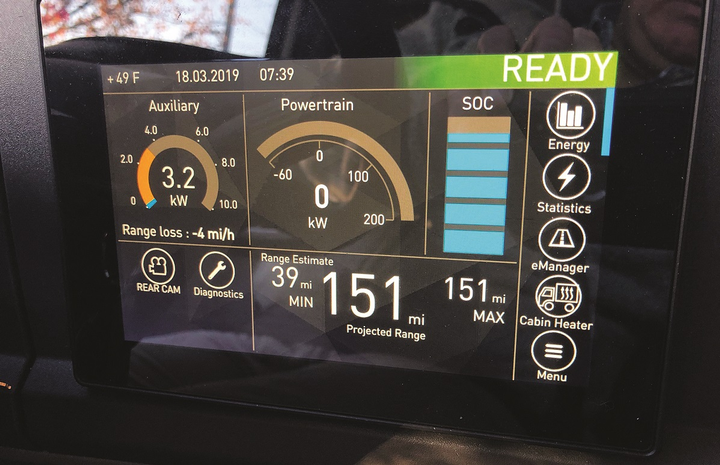 Engineers at Hyliion, whose mild-hybrid assist system display is seen here, are also involved in the development of personalized display systems that use a Bluetooth app to sync a driver’s preferences to a vehicle.

Facial recognition will be a crucial interface component in trucks of the future as well, says Roman Tsarovsky, chief technology officer at Serve, a company developing this technology for trucking. Initially, he explains, facial recognition technology for trucks was developed to meet needs in the pharmaceutical industry, which will have to meet tough government regulations beginning next year to ensure that prescription drug shipments are being picked up, and delivered to, the people who are supposed to be shipping and receiving the goods.

But, Tsarovsky says, one need only look at the booming last-mile delivery segment and the evolution of blockchain to understand why facial recognition inside a truck cab will be critical for fleets in the future. “As the pressure grows to know where a truck is, what the status of a delivery is, to place and take orders and get paid in a transparent and fast-moving environment, simply knowing who a driver is, and who a receiver is, will be a huge advantage,” he says. “It’s a simple technology feature that will streamline operations, while greatly enhancing security. And, even in the future, trucking will be a business that thrives with human interaction. And facial recognition technology enables all of those capabilities.”

As for voice commands inside the truck, Healy says that technology is also simply a matter of time. “Some drivers love the idea,” he says. “And others don’t want anyone talking to them while they’re in the truck. So we think this capability will be up to the driver.” But the possibilities are endless, he says. For instance, you can tell the truck you’re going to stop in the next hour, so the APU can start storing up hotel load power levels. “I think it will be transformative.”

Hagen loves the potential a smart, connected, voice-activated truck cab could give him. “Just imagine asking out loud how far to the next truckstop and getting an answer,” he says. “And then imagine just asking if there are any parking spaces available for the night — and if there are, telling your truck to go ahead and reserve you one. That would be incredible. I can’t even begin to tell you how awesome that would be.”

“All of this is coming, and we need to have standards in place to help drivers be safe when it does,” says Fred Andersky, director of customer solutions and government affairs for Bendix. “Today, we don’t even have standardization in terms of icons and switch and gauge placement in our trucks, because we’re still in the stage where these new technologies are competitive selling points. Smart interfaces will go a long way toward enhancing safety. But standardization across all makes and models will be critical for making that a reality.”