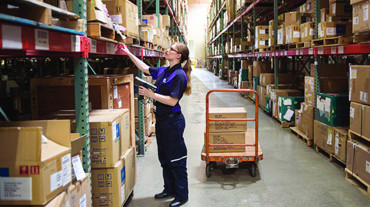 [Ensure you have all the info you need in these unprecedented times. Subscribe now.]

Online shopping was already on the rise before the COVID-19 pandemic hit, and it accelerated dramatically once many consumers began staying home. E-commerce is expected to continue to grow throughout the holiday season, placing added strain on the supply chain and increasing demand for final-mile deliveries.

“We’re anticipating an unprecedented peak season. It will be an industrywide ‘shipathon’ that we’ve never seen before,” said Ryan Kelly, vice president of global e-commerce marketing at FedEx Corp.

Kelly said FedEx, which is based in Memphis and ranks No. 2 on the Transport Topics Top 100 list of the largest for-hire carriers in North America, has been seeing peak-like level volumes since March.

UPS Inc. is currently delivering volumes similar to the peak holiday shipping season with about 70% of its deliveries to residences, compared with about 50% during the rest of the year, said Dawn Wotapka, communications manager for UPS, which is based in Atlanta and ranks No. 1 on the for-hire TT100.

“UPS has met this demand by utilizing its expanded weekend operations and, in Q2 2020, hired an additional 39,000 full- and part-time small package operations employees,” she said.

Carriers are preparing for this expected surge in volume.

Josh Dinneen, senior vice president of commercial development for LaserShip, a regional last-mile delivery company based in Vienna, Va., said the company’s fleet — which ranks No. 71 on the for-hire TT100 — is doing more peak planning now than it was in November last year.

“You can sound the tsunami buoy and know that it is coming, but you don’t see it yet,” he said, adding that the company has already seen volume increases. “Everyone is very concerned, and no one knows what is going to happen.”

Richard Metzler, CEO and president of Lone Star Overnight, a parcel delivery company based in Austin, Texas, said he expects volume increases anywhere from 50% to 2.5 times the norm.

“The bottom line is that everybody is projecting significant growth, and I think it is safe to say there is much more demand in the marketplace than there is capacity,” he said.

Michael Zimmerman, a partner with the global strategic management consulting firm A.T. Kearney and lead author of the 31st Annual State of Logistics Report, said the surge in e-commerce has providers adding capacity. Still, they cannot ramp it up fast enough.

“FedEx and UPS are raising rates and hiring thousands. Amazon is planning over 1,000 forward deployed warehouses in the USA, and ports are chock-filled with inbound containers,” he said.

Drayage companies cannot find the chassis to haul containers away, and intermodal companies have raised surcharges by as much as $5,000 a load to move containers across the country, Zimmerman said. He added that large carriers are facing capacity issues as well.

Dan Coll, vice president of e-commerce for Kenco Logistics, based in Chattanooga, Tenn., agreed. He noted that it starts with finding carriers and drivers available at ports.

“The timing of inbounding product is being condensed because it is taking more time on the front end,” he said.

The Deloitte annual holiday retail forecast estimates that e-commerce sales will grow by 25%-35% year-over-year during the 2020-21 holiday season, compared to 14.7% growth in 2019.

Ben Wiesen, president of Carrier Logistics Inc., a provider of transportation management software, said the trend toward e-commerce and omni-channel not only predated COVID-19 but also enabled society to continue to function during the pandemic.

Satish Jindel, founder of SJ Consulting Group, expects the upcoming peak to be like none experienced by the transportation industry and, in particular, unlike anything parcel and less-than-truckload carriers have seen in the last three decades.

“The supply chain is already feeling it with average daily parcel volume for 2020 estimated at 78 million, which is a 28% increase over 2019,” Jindel said, adding that the peak season average daily volume will reach 122 million.

Jindel said that with only a short amount of time left before the peak, carriers are limited in doing anything more than the traditional methods, such as hiring temporary workers.

“The only option available now is to make better use of the information about the parcels and the consignees to achieve delivery density whereby they can increase the number of parcels per delivery,” he noted, adding that generous unemployment benefits and continued fear of COVID-19 have placed further constraints on carriers that would like to add capacity but cannot do so.

Zimmerman said FedEx and UPS have become selective in keeping existing clients due to the lack of capacity caused by COVID-19, something FedEx signaled even before the pandemic with its split with online retail giant Amazon.com Inc. “They are shifting focus toward profitable clients and adding capacity only selectively with the anticipation of the uncertainty in trends after a discovery of the vaccine,” he said.

“Now, due to the environment, they’re flexing capacity control,” he said. “They’re introducing more fees and putting limits on the amount of capacity ... so they can allocate capacity across their customers based on size, performance, cost, etc.”

The top fleets are raising rates and leveraging surcharges.

Dinneen said FedEx is starting its peak surcharge Nov. 1, two weeks ahead of UPS and three weeks ahead of LaserShip. Zimmerman said carriers and parcel delivery providers have been investing in technology and processes to provide customers with greater transparency and visibility while also improving asset utilization to compensate for shorter-haul volumes.

“These investments will be put to the test in the holiday season, and the lessons learned will be used to confirm or redirect investment,” he said.

UPS expects to hire more than 100,000 seasonal employees to support the anticipated annual increase in package volume that will begin in October and continue through January.

“We’re preparing for a record peak holiday season. The COVID-19 pandemic has made our services more important than ever,” said Charlene Thomas, chief human resources officer for UPS.

“We’re expanding more than 50 facilities with additional material handling equipment and automation,” he said, adding that FedEx is looking to hire more than 70,000 employees to help with the peak season.

OnTrac is adding facility space for peak season and adding another fully automated hub in southern California. Plus, it is using more Sprinter vans, which have more delivery capacity than cargo vans, Magill said.

“We are adding buildings, adding bodies and using larger equipment. The goal of that is to increase our delivery capacity by 20% by the time traditional peak season starts,” he said. “Our goal is to continue that extra 20% and bring on those retailers who we’ve told, ‘We’d love to help you, but we can’t do it until January.’ ”

Saluting the men and women of the trucking industry who kept America's essential goods flowing during the coronavirus pandemic.

OnTrac also is implementing route optimization software to speed up the morning sort so a second wave of drivers can come in.

“The big addition this year is technology,” Magill said, adding that OnTrac is working to add staff but is competing with UPS, FedEx and Amazon.

LaserShip is adding automation and material handling equipment to increase capacity. It also is deploying additional technology in the field and has a mobile app that helps its contractors with sequencing, which increases their efficiency and lets them complete more deliveries, Dinneen said. LaserShip, like most carriers, is putting caps on customers.

“There seem to be more volumes than the network can support,” he said.

Metzler, of Lone Star Overnight, said regional carriers are somewhat of a safe bet in the current peak, but even they have limited capacity.

“I’d rather say no to somebody than disappoint them, and that is what we’re doing,” he said. “Either we say no and push to 2021, and I’m building up quite a backlog, or we say ‘no,’ and they’re frustrated, and we never see them again.”

“Where we’ve said no, we’ve tried to do it the right way. We’re transparent and tell them why it is the right decision for them and for us,” he said.

Ultimately, finding capacity is a function of service and cost. Shippers have shown they are willing to pay a premium for the capacity they need at the last minute, Zimmerman said. He added that volatility from COVID-19 and the “K-shaped” recovery in which some industries spiked while others dropped has created a series of transitions for the logistics industry.

With the holiday season, the critical variable is time.

Forecasting is a crucial element of that planning, Metzler said.

“What we do with our major accounts is to have a weekly implementation call or meeting that is cross-functional in nature. It has IT, operations and customer service,” he said. “We’re collectively tackling the big spike that inevitably will come, and that is when it works the best.”

To help understand demand, LaserShip’s Dinneen said the company has focused on collaboration.

“We’re having very close partnership type of conversations with our customers and retailers to understand what is happening,” he said.

Kenco Logistics is working with various partners and is trying to understand how deliveries can be timed so that inventory flows into the facility are tied to a shipper’s promotional calendar, Copp said.

Dinneen noted that shippers need a system capable of handling a multicarrier solution to diversify their carrier mix. Although carriers are limiting new customers in 2020, Dinneen said he expects shipper demand to continue into next year.

“They have a fire burning in front of them, which is November and December, so they are hyper-focused on that, but the fire isn’t going to go away in January. They’re trying to make plans to secure that capacity,” he said.

When demand exceeds capacity, there will be delays, which were already showing up in August and September, Jindel said. He added that delays are likely to get worse in November and December. To prepare and minimize the negative impact, shippers should deploy better and more accurate tracking technology, which will allow them to proactively alert consumers about the status of their orders being fulfilled and if they are delayed, Jindel said.

Wiesen, of Carrier Logistics, said capacity providers will be clear that there will be longer procurement times to get shipments moved from Point A to Point B.

However, he said the public has become more accepting of longer lead times. “We had become very accustomed to getting anything we wanted any time we wanted, and all of a sudden we couldn’t. People started realizing sometimes you have to wait for things,” Wiesen said. “The service failure is no longer the catastrophe it used to be.”

FedEx’s Kelly, however, said delivery expectations are still running high despite a pandemic and the looming holiday shipping season.

“We encourage everyone who is planning to do their holiday shopping online to shop and ship early,” he said, adding that shippers should prepare for the unexpected. “In addition to record shipping volume, Mother Nature can be a factor in the ability of shipping providers to deliver.”