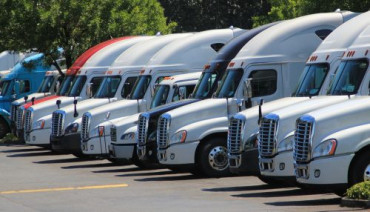 Market conditions over the past 18 months have made the trucking industry a hotbed for acquisitions, with larger carriers snapping up smaller carriers while that capacity’s cheap and as part of the industry’s ongoing in-fight for available truck drivers.

“One thing we see when the market is weak is a pickup in M&A (mergers and acquisitions) activity,” says Jeffrey Kauffman of Loop Capital. “Carriers have an opportunity to pick up customers and pick up drivers at a discounted rate,” he says. “Business values have dropped,” making acquisitions more reasonable and affordable, he says.

Kauffman says acquisition activity is noticeably higher than in 2017 and 2018, when the market was stronger and it was easier for smaller carriers to turn a profit.

Those conditions have since pivoted, and softer trucking rates, combined with spiking insurance premiums, have left smaller carriers looking to sell — just as larger carriers are looking to buy. “With so many smaller companies being family owned, they’re trying to get out while they can,” says Jordan Nelson, an analyst at KSM Transport Advisors. “Trucking…is a fragmented industry,” he says, pointing to the tens of thousands of carriers that operate between one truck and 50 trucks. He expects the industry to continue consolidating while current economic conditions persist.

But the biggest driver behind the ramp-up in acquisitions, says Nelson, “is access to more capacity” — drivers and trucks with customers already in place.

“A lot of times when you are looking at companies, it is almost exclusively because of drivers,” says Dennis Morgan, president of Cowan Systems, a privately held truckload carrier with 2,500 trucks.

Cowan has made five acquisition over the past decade, including the purchase of the family-owned Carlisle Carrier Corporation last July. Likewise, carriers are looking to diversify into emerging industry sectors, says Morgan. Echoing Nelson’s point, owners of those smaller, family-owned businesses operating in a trucking niche are looking to cash out and retire, Morgan says.

On a macro level, the trucking industry has been responding to the consolidation taking place by its shipper customers, says John Larkin, operating partner at Clarendon Capital’s transportation and logistics investment arm. Large shippers, especially in consumer retail, are getting larger and tightening their group of core carriers to reduce administrative costs.

Also, says Larkin, interest rates for equity and debt capital are as low as they’ve ever been. The liquid bulk segment has been one of the hottest industry sectors in terms of acquisitions, says Larkin. Of note, Keenan Advantage has acquired a number of carriers to take the lead in the gasoline delivery business. Also, Heniff Transportation in December acquired another bulk transporter, Superior Bulk Logistics. Also in the bulk sector, Transwood Carriers (a roughly 800-truck fleet out of Omaha) acquired the 150-truck Kane Transport in December.

And as fleets continue to try to find footing in the final-mile segment, acquisition activity has been consistent in that segment, says Kauffman. For instance, J.B. Hunt just last month made another last-mile acquisition by purchasing RDI Last Mile co.

The onset of the electronic logging device mandate has also contributed to acquisition activity, says Steve Rush, owner and chief executive of Carbon Express, a 72-truck liquid bulk hauler based in Wharton, N.J.

Rush has been in trucking for 55 years. The state of the industry today reminds him of the early 1980s when deregulation caused unionized motor carriers to be usurped by non-union carriers that were adapting more quickly to market opportunities. Similarly, Rush believes carriers who have not responded to opportunities in the ELD era are most likely to either go out of business or be bought up. When Carbon Express switched to e-logs more than a decade ago, it began rating by the hour.

“It caused us to realize we weren’t charging enough money,” he said. “We looked at some carriers to buy, who were smaller than us. When we looked, I realized they would be going out of business. They have not raised rates in the most volatile time since deregulation.”

“The industry is made up of so many scared poker players,” he added.

Rush noted that when he has evaluated carriers for an acquisition, the most important attributes are the character of the management team, the safety record, driver retention and how long they have been on e-logs.