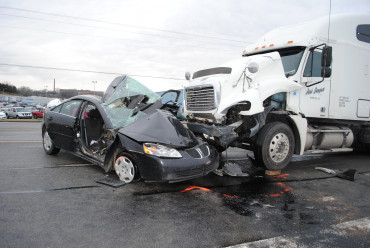 The new academic study to determine the ELD mandate’s impact on safety in the trucking industry is exposing as false one of the central arguments made by advocates. In the push to mandate ELDs, advocates often made the claim and cited studies, paid for by special interest groups, showing the impact of such a mandate would improve overall safety on U.S. roadways by reducing driver fatigue, thus eliminating more than 1,800 crashes per year. The phrase often used was “ELDs will save lives.”

Further, advocates often parroted these created statistics to lawmakers as a pre-text to push for immediate action. New data is now blowing a hole in this argument.

An academic team led by Alex Scott, assistant professor of supply chain management at Northeastern University’s D’Amore-McKim School of Business, set out to determine if enforcement of the Federal Motor Carrier Safety Administration’s (FMCSA) ELD mandate has, in fact, reduced the number of accidents so far.

Researchers participating in the study wrote: “We combine detailed data from millions of driver inspections and all federally-recordable crashes from January 1st, 2017 through September 1st 2018 to assess the effectiveness of the mandate.”

So, let’s look at the results of the study.

Since most large carriers already deployed ELDs, researchers found HOS compliance among drivers of these carriers remained statistically unchanged. The discernible impact was seen among drivers working for small carriers along with owner operators. Their compliance rates improved dramatically.

The study found small carriers, deemed as carriers with 2 to 6 trucks, and owner operators, saw their HOS violation rates decline by more than 48% from their pre-ELD mandate levels.

Clearly, the ELD mandate is bringing many more drivers into HOS compliance.

Crashes among large carriers did see a reduction during the reported period by as much as 12%. However, researchers found crashes among the most impacted carriers, that being carriers deemed “small carriers” and owner operators actually “increased.”

That’s right. Crashes among independent owner-operators increased as much as 3.5% and 1.8% for carriers with two to six trucks.

When all the data from large carriers, small carriers and independent owner-operators was factored together, researchers concluded, “these numbers do not point to any obvious reduction in accidents due to the ELD mandate, and in some cases suggest a possible increase in accidents for those carriers most affected by the mandate.”

Researchers hypothesized that a natural response to stricter HOS compliance among drivers most affected would be to “increase work intensity per unit time.” In other words, drivers would begin to drive faster than they did in the pre-ELD era.

This is exactly what the study found. Individual owner-operators saw a whopping 35.3% increase in “unsafe” driving violations during the strict ELD enforcement period. Small carriers saw an increase of 17.5%.

To conclude its findings, researchers wrote:

“We find that the ELD mandate unequivocally enhanced HOS compliance… However, the ELD mandate did not noticeably improve safety, and we are able to produce no statistically significant evidence that ELD adoption by the smaller firms corresponded to any reduction in accident rates.

Lacking precise information on the heterogeneous benefits of adoptions, previous cost-benefit analyses of the mandate have been forced to use a “one size fits all” methodology, which has likely overstated the potential benefits (1,844 crash per year reduction, Federal Register 2015).

A contributor for our failure to observe significant accident reductions from smaller firms is that the gains from fatigue reduction were offset by increases in unsafe driving behavior. Hardening the HOS constraint reduces per-worker hours and workers may compensate for this lost income by driving more intensively, namely, covering more miles per hour.

Unfortunately, this may also incentivize an increase in unsafe driving behavior, which is more tightly correlated to accident rates than hours of service violations.”

This is quite a blow to ELD mandate advocates and is yet another concerning study for the general motoring public and the trucking industry. FMCSA has not yet commented on this study, but has been made aware of its existence.

Finally, researchers from this study suggest “increasing flexibility” in the HOS regulations to help alleviate the negative impact of pervasive detention drivers are facing, and to reduce the advantage that large carriers with drop-and-hook operations have over smaller carriers that can’t afford to keep trailer pools at their customers’ facilities.