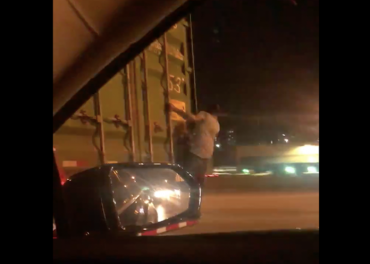 A Twitter user recently captured video of a man putting his life in danger by hanging on to the back of a semi truck as it traveled at speeds of 50 m.p.h. on a Chicago highway.

Another driver following the truck caught video footage of the incident. In video posted to Twitter, you can see the man hanging on to the moving truck with just one arm and later appearing to dance as the truck travels down the Dan Ryan Expressway.

CBS Chicago reports that it isn’t clear how long the man hung on to the truck or whether the truck driver ever knew he was there.

You can view the video below.