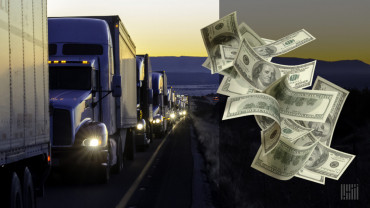 President Donald Trump issued an executive order on Saturday providing relief for Americans from the payroll tax. It was part of a broader package of orders he signed but is perhaps the one that is most confusing at this time for employers, and many trucking operations may be wondering what to do.

The order instructs employers to defer certain payroll taxes on Americans making less than $100,000 a year through the end of 2020. According to Kiplinger, American workers pay 7.65% of their wages in payroll taxes; 6.2% of that goes to fund Social Security and the remainder for Medicare. Employers, who are responsible for withholding the taxes and remitting them to the U.S. Treasury, pay an equal amount. Trump has said that cutting payroll taxes will lead to more money in Americans’ paychecks each week.

“We’ve had it,” Trump said in remarks announcing the orders on Saturday at his Bedminster, New Jersey, golf club. “We’re going to save American jobs and provide relief to the American worker.”

How companies should approach the payroll tax deferment, though, is an open question. Tim Almack, a partner in accounting firm Katz, Sapper & Miller’s Audit and Assurance Services Group, told FreightWaves the uncertainty means employers should probably hold the status quo.

“If it was me, I’d hold off until there is more information available,” he said.

White House economic advisor Larry Kudlow told CNN’s State of the Union the average worker would see a $1,200 increase in pay over four months. Almack, though, cautioned that workers could be liable if the money has to be repaid. Under the executive order, the payroll tax cut is temporary and only defers the tax; it does not eliminate it.

“If I’m victorious on November 3, I plan to forgive these taxes and make permanent cuts to the payroll tax. I’m going to make them all permanent,” Trump said at the Saturday news conference.

According to the order, Trump has directed the Treasury to allow employers to defer the tax, also known as FICA, and seek permanent avenues to eliminate it – should he get reelected. Because tax policy is set by Congress, it’s unclear if Trump can accomplish this without Congress passing legislation that permanently eliminates the tax. Without a legislative solution, it’s likely employers and employees would have to pay this deferred tax at a later date.

Almack said that without further clarity on the matter, companies are best off waiting before making a decision, as tempting as it may be to tap into the additional cash it would generate.

Legal scholars are divided on if the president has the authority to issue these executive orders, particularly the unemployment benefits and payroll tax relief, and a court case may well determine that authority. The immediate impact, though, is a muddying of the tax waters, and what exactly trucking and transportation companies should do in the interim.

Almack’s opinion is clear – let the process play out before moving forward and creating additional liability.