Truck Drivers Could Be Among Earliest to Get COVID-19 Vaccine 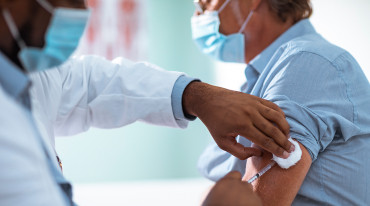 Truck drivers and other workers in critical and essential jobs could be among the earliest people to receive COVID-19 vaccinations as several major pharmaceutical companies begin working with large transportation firms to deliver the vaccines.

Distribution efforts, dubbed Operation Warp Speed, could start as early as mid-December, according to a committee within the Atlanta-based Centers for Disease Control and Prevention. As many as 40 million doses could be delivered by the end of the year.

On Dec. 1, the Center for Disease Control and Prevention’s Advisory Committee on Immunization Practices formally stated that the first available and approved COVID-19 vaccines should be administered to health care and frontline workers, as well as residents of long-term health care facilities, such as assisted living centers and nursing homes.

The panel’s vote was 13-1 in favor, and the advisory committee’s recommendation now goes to CDC Director Robert Redfield for final approval.

Among those that could receive the vaccine after health care workers are truck drivers.

ATA Executive Vice President for Advocacy Bill Sullivan said in the letter, “As the trucking industry is called upon to deliver vaccines across the country, it is imperative that truck drivers have prioritized access to the vaccine to minimize the potential for supply chain delays and disruptions,” he said. “Our nation’s efforts to successfully confront the COVID-19 pandemic depends on the resilience and integrity of the transportation network. As we saw at the outset of the pandemic, when supply chains are disrupted, consequences are fast to follow.”

University of Minnesota-Morris economist and professor Stephen Burks is a trucking industry expert and a former driver. He also is a recent COVID-19 survivor, having spent much of November ill with a high fever and congested lungs. His wife also was sick, but with much milder symptoms, and she recovered faster.

Burks told Transport Topics truck drivers need to be high on the list of people receiving the vaccine early.

“Medical personnel taking care of COVID patients would be the first in line, and that would make perfectly good sense,” he said. “And there are essential workers, such as truck drivers and grocery store workers who have to be interacting with people to make the basics of the economy go on, even when we have a lockdown. Truck drivers count in this group of essential workers.”

Biotech firm Moderna on Nov. 30 applied to the FDA for an emergency use authorization. Pharmaceutical company Pfizer filed its application with the agency Nov. 20.

The trucking freight and logistics industry will play a critical role in distribution, and other modes of transportation will be involved as well.

Fort Worth, Texas-based American Airlines announced Nov. 25 it recently had moved a trial of a major pharmaceutical company’s thermal packaging from Miami to South America in anticipation of flying the vaccines.

On a LinkedIn post, CEO Doug Parker pointed out, “More than half of the world’s air cargo flies in the bellies of commercial airliners. The vaccine cannot be distributed as quickly as possible without the combined capacity of cargo and commercial carriers.”

Several major transportation providers, including UPS Inc., FedEx Corp. and DHL, have told TT they are deep into their distribution plan. All of the logistics companies that will move the vaccine are building new cold storage facilities around the country to have enough capacity.

Of the vaccines showing the most promise, experts say Pfizer’s may be the most difficult to transport because of the ultracold temperatures required for the vaccine to be effective: near minus 94 degrees Fahrenheit, or 20 degrees colder than winter at the South Pole. It also has a shorter shelf life than Moderna’s vaccine.

For Moderna, its vaccine must be shipped at comparatively less frigid minus 4 degrees Fahrenheit but can be kept in a standard refrigerator for up to 30 days. Pfizer’s may only remain effective in a freezer for five days.

Burks is cautiously optimistic the logistics and trucking industry’s planning and preparation will carry the day.

“I am expecting some glitches, but I would expect overall, it will mostly work,” he said. “It’s going to be tricky, especially for the Pfizer vaccine. The problem is to get through the next six months or eight months. After that, we’ll be in a world that will be relatively plentiful with vaccines. We’ve got to get through the summer. Will we substantially get the job done? I am hopeful.”