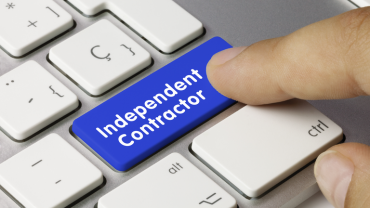 The Department of Labor’s final rule clarifies the standard for employee versus independent contractor. If implemented, the rule, which includes specific examples related to trucking, would take effect on March 8.

The U.S. Department of Labor (DOL) on Jan. 6 announced a final rule clarifying the standard for employee versus independent contractor status under the Fair Labor Standards Act (FLSA). Absent additional legislative or regulatory action under the incoming Biden administration, the rule, which includes a specific example regarding safety requirements in the trucking industry, will become effective on March 8. Biden is, however, expected to nullify the rule.

According to the American Trucking Associations (ATA), the final rule provides certain policy benefits to motor carriers and owner-operators. It “provides working Americans the freedom to pick the occupation and flexibility they desire and gives businesses clarity on the characteristics of a bona fide independent contractor so they can more easily comply and avoid litigation,” ATA noted. “Many Americans choose the independent contractor model — including hundreds of thousands of owner-operators in trucking — because of the opportunity it provides and empowerment to choose the conditions (e.g., hours and routes) that suit their lifestyle.”

It reaffirms an “economic reality” test to determine whether an individual is in business for him or herself (independent contractor) or is economically dependent on a potential employer for work (FLSA employee).

It identifies and explains two “core factors” that are most probative to the question of whether a worker is economically dependent on someone else’s business or is in business for him or herself:

The rule identifies three other factors that may serve as additional guideposts in the analysis, particularly when the two core factors do not point to the same classification:

“This rule brings long-needed clarity for American workers and employers,” said U.S. Secretary of Labor Eugene Scalia. “Sharpening the test to determine who is an independent contractor under the Fair Labor Standards Act makes it easier to identify employees covered by the Act, while recognizing and respecting the entrepreneurial spirit of workers who choose to pursue the freedom associated with being an independent contractor.”

The incoming Biden administration, however, has announced plans to freeze and reverse or alter Trumps "midnight regulations" on inauguration day. ATA, which anticipates the rule may not go into effect in March, said the final rule does not preempt state wage and hour laws, though many states follow federal guidance and rules in construing employment classification and may adopt provisions in the final rule for purposes of applying state law (even if the rule never goes into effect federally). The final rule also does not directly impact workers compensation, unemployment taxes, state or federal payroll taxes, or other employment laws.

The Teamsters Union is calling on the Biden administration to halt implementation of the rule. Teamsters believe the rule would make it easier for companies to classify their workers as independent contractors and therefore, not allow them to be covered by federal minimum wage and overtime laws.

“As it stands, companies across the country have sought loopholes and workarounds to misclassify workers as independent contractors, which denies them proper wages and job protections as well as access to unemployment benefits,” Teamsters urged. “Teamsters have been aggressively pushing back on this issue for years at the ports, and especially during the pandemic where misclassified truck drivers are denied proper protective gear and workplace safety measures in addition to fair wages and benefits. There is already a growing anti-worker issue that will be exacerbated if these regulations are enforced.”

In comments filed by the Teamsters in October, the union stated that the new rule “unconscionably curtails the reach of the FLSA—increasing the number of workers who are denied its statutory protections—during one of the most economically fraught times in our country’s history.” That said, the Teamsters expressed confidence that President-elect Joe Biden will not allow this rule to take effect, given that it is not slated to be implemented until after he is sworn in on Jan. 20.

“Joe Biden is a friend of workers as he has said on the campaign trail and proven with his public service,” Teamsters General President Jim Hoffa said in a statement. “I have no doubt that he will postpone the implementation of this despicable rule so hardworking Americans can earn a fair wage and support their families.”