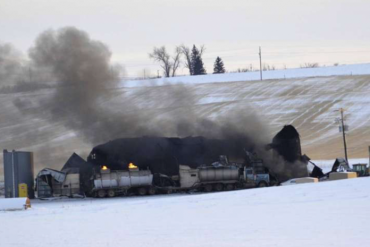 A Montana trucking company was sentenced to a year in prison and ordered to pay more than $1 million worth of fines following an explosion that seriously injured three workers — and the attempted coverup that followed.

Wood was found guilty in May of 2018 on multiple charges of conspiracy, wire fraud, mail fraud, obstruction of justice, and hazardous materials shipping paper and placarding violations.

The charges stem from a 2012 incident during which Wood tried to cover up the fact that the company was hauling hazmat without placards days after an explosion at an oil recycling plant.

The explosion happened on December 29, 2012, in Wibaux, Montana, after a Woody’s Trucking driver picked up a load of natural gas condensate, or “drip gas” in North Dakota and delivered it to Custom Carbon Processing, Inc.’s facility. However, the load’s bills of lading identified the driver’s load as “slop oil and water,” which isn’t hazardous.

“On the date of the explosion, the driver was pumping from the truck’s front tank into the CCP facility, when flammable vapors from the drip gas ignited and caused an explosion, injuring three employees. The tanks on the truck burned for eight days. It was determined later that the truck contained drip gas and not slop oil and water,” according to a news release from the U.S. Attorney’s office.

The CCP facility was destroyed by the explosion.

Woody’s Trucking employees later sued their company and the CCP facility for negligence.

Truck driver Kelly Steen, who was contracted by Woody’s Trucking, was separately convicted in 2015 on a felony charge of transportation of hazardous materials without a placard and sentenced to three years of probation and a $2000 fine.