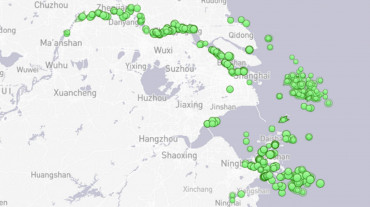 Container ships stuck off Los Angeles/Long Beach are grabbing the headlines — with a record-tying 40 at anchor on Friday. But there’s another massive shipping traffic jam out there, one that’s holding up even more cargo.

This other, less-publicized tale of seaborne gridlock is set in China and it’s not about container ships, it’s about dry bulk carriers.

Bulker congestion has now risen to historic highs as China enforces stricter COVID rules for arriving vessels. And what happens in China will be felt in America. Every bulker stuck at anchor in China is one less ship that’s available to load U.S. soybeans, corn, wheat and coal — pushing spot freight rates for U.S. bulk exports higher.

“It is staggering how much congestion there is [in China],” said Martyn Wade, CEO of Grindrod Shipping, on a conference call with analysts on Thursday.

According to Nick Ristic, lead dry cargo analyst at Braemar ACM Shipbroking, there were 1,692 bulkers worldwide with aggregate capacity of 142 million deadweight tons (DWT) waiting in queues in mid-August. That was “the highest level we have on record and about 15% higher year on year,” he said. Since then, the numbers have come down only slightly, to 1,652 ships totaling 129 million DWT.

In comparison, U.K.-based data provider VesselsValue reported that there are 409 container ships stuck in congestion worldwide with an aggregate capacity of 2.7 million twenty-foot equivalent units. Not only are there far more bulkers tied up than box ships, but a typical bulk vessel carries much more cargo (measured by weight) than the average container ship.

China is driving the rise in global dry bulk congestion, comprising more than a third of the total, said Ristic. Bulker congestion in China hit 52.7 million DWT in mid-August, representing 6% of global capacity, up 28% from mid-July and 23% year on year. Bulker congestion was also high outside of China, but in line with seasonal norms.

U.K.-based forecasting and advisory company Maritime Strategies International (MSI) highlighted the same trend. In its latest sector outlook, it cited data from Oceanbolt showing 405 bulkers waiting outside Chinese ports on Aug. 12 for more than five days, compared to 261 on the same day last year and 113 on that day in 2019, pre-pandemic.

The flashpoint in China is the Yangtze River region. Ristic said it accounts for “about 18% of total bulker congestion in China and it has become a particularly bad bottleneck for geared vessels [bunkers with onboard cranes].” He noted that the Yangtze region accounted for almost a third of all Chinese congestion involving Handysizes (bulkers with capacity of 10,000-40,000 DWT) and Supramaxes (40,000-70,000 DWT, geared only).

“Basically, 7% of the world’s Handies [Handysizes] are tied up in congestion in China,” said Wade. “That’s very positive [for rates].”

COVID rules have caused bulker delays throughout the year, but this month’s delta variant outbreak in China brought restrictions to a whole new level.

“We’ve heard reports that on the Yangtze, they’re talking about all river pilots having to do compulsory quarantine,” said Wade.

According to Ristic, “Regardless of how long vessels have been at sea since their last port call, their risk level is reportedly being assessed by authorities based on factors such as crew nationality and boarding time, navigation route, and cargo on board. On top of this, quarantine measures have greatly reduced the number of pilots operating on the river, which has been slashed up to 50% versus normal levels.

“At other ports, we are hearing reports of mandatory quarantine periods, cargo operations not being allowed to proceed until negative PCR test results are obtained and other protocols,” added Ristic.

According to Argus Media, “Many Chinese coastal ports require a 14-day quarantine for imported cargoes after they depart from ports in other countries — including Indonesia, India and Laos — before they can berth. Some other Chinese ports, including Nanjing and Changshu along the Yangtze River, require a 21-day quarantine. The Liuheng terminal at east China’s Zhoushan port requires a quarantine as long as 28 days. All crew members must take COVID-19 test before vessels are allowed to discharge their cargoes.”

As in container shipping, dry bulk is seeing higher rates due to a combination of strong demand and congestion-restricted vessel supply. Congestion is “a key factor behind strong [dry bulk] freight markets,” said MSI.

“With Chinese port congestion rising, Panamax [65,000-90,000 DWT] coal shipments to China nearing new heights and the U.S. soybean season starting next month, MSI is bullish in the near term for Panamax earnings,” it said.

Asked whether China’s attempt to contain the delta variant could extend the dry bulk rate rally, Ristic told American Shipper, “We were expecting [congestion] to clear up a bit quicker but with what’s happening in China now, I think the COVID factor will remain significant for the remainder of the year.

“Ultimately though, if there is a significant slowdown in import growth or disruptions to cargo supply, congestion alone won’t be able to save the market,” he warned.