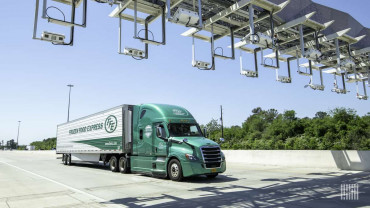 Frozen and Food express, the nation’s largest temperature-controlled less-than-truckload carrier, announced its biggest pay increase in company history. Team drivers can now earn a starting salary of $95,000 per year and drivers with experience can earn up to $150,000 annually, or $300,000 per team.

The carrier raised its starting pay rate to a range of 72 cents to $1 per mile, depending on experience, from a range of 60 cents to 80 cents per mile, effective Monday.

FFE is also paying new team drivers a $10,000 sign-on bonus, $20,000 per team. Drivers will receive a paid salary while they are off duty and during home time. Teams will also get a new late-model tractor to operate every year in addition to a full benefits package.

Obstacles attracting driver talent have been high with most fleets unable to seat additional equipment and cash in on the freight boom. Capacity is very tight as there are more than 200,000 fewer drivers than a year ago. COVID concerns have led to early retirements, driver schools are operating at restricted capacity and increased Drug & Alcohol Clearinghouse compliance has forced some operators out of the business.

Transportation and warehousing provider WEL companies recently announced its second pay increase of the year. Effective May 2, all company drivers received a 4 cent-per-mile increase on dispatched miles. Including the increase earlier in 2021, total pay has risen by 7 cents per mile.

The De Pere, Wisconsin-based carrier also increased dedicated driver pay, adding $10 to daily minimum rates. The company has also rolled out a guaranteed pay model and increased holiday and vacation pay this year. The pay hikes are part of WEL Companies’ plan to add 75 units to its more than 500-truck fleet in 2021.

USA Truck  announced Friday it has simplified its driver pay structure after receiving feedback from drivers that the old plan was too confusing. The new program allows drivers to earn a higher per-mile rate without qualifiers and a complicated bonus structure.

The Van Buren, Arkansas-based carrier has also lowered health care premiums and increased paid time off and per diems in 2021.

“We are delighted for the opportunity to continue to improve our culture at USA Truck. We have listened to the feedback from our drivers and are responding to that feedback. Our new simplified pay package is a significant improvement to the lives of our drivers,” said Blair Ewell, SVP of truckload.