Need a warehouse? You may have to wait 9 months 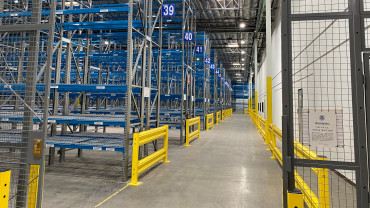 Warehouse demand is at record levels. Driven by rising e-commerce demand and related one- and two-day shipping demands, the need for new warehouses has never been higher.

Real estate services firm JLL published a survey of over 720 logisticians last month that found 74% predict 5% annual growth or more in warehouse demand over the next three years. About 28% of those said it would be 20% or more, and 71% expect demand from e-commerce to grow significantly through 2024.

That explosion in growth, though, is running into a myriad of factors that are slowing the opening of such facilities.

“Time is money so every delay in this whole process is adding to the cost, not only for the 3PL, but also for the customer, and it’s putting additional strain on the supply chain because the capacity can’t be delivered,” explained Rock Magnan, president of third-party logistics firm RK Logistics Group.

Magnan told Modern Shipper that a combination of factors, including labor and steel shortages, are forcing delays in getting warehouses up and running.

“When we identify a warehouse and negotiate a lease for the building, we are on the hook for the lease cost,” Magnan said. “Unfortunately, if you can’t get the racking, you can’t use the building as you intended to.”

Mike Ereno, president of Warehouse Engineering & Equipment Services, which designs the interior of warehouses for clients, including RK Logistics, told Modern Shipper the global steel shortage is hampering efforts to get storage rack and material handling equipment into new warehouses.

“Most of what we’re seeing here are extremely long lead times for storage rack and material handling equipment,” he said, noting that lead times have moved from four to six weeks to as long as nine months. “There’s issues with sourcing raw materials to get to the mill so they can roll out flat sheets to make their product.”

Time is money so every delay in this whole process is adding to the cost, not only for the 3PL, but also for the customer, and it’s putting additional strain on the supply chain because the capacity can’t be delivered.

Ereno also noted that prices are rising — to as much as 2.5 times what they were a year ago — and labor shortages at manufacturers are also contributing to delays and uncertainty. He said the price uncertainty is making it impossible to properly bid out jobs.

Steel prices have risen more than 60% since the start of this year, surpassing $1,600 a ton this summer according to S&P Global Platts, and trading over $1,900 as recently as Friday. Despite that, some steelmakers are refusing to open older mills.

“The industry is in transition,” Mark Millett, chief executive of Steel Dynamics, told the Wall Street journal this summer. “If you’ve got ancient assets to compete against new, state-of-the-art facilities, you’ve got to question whether you bring those back.”

Both Magnan and Ereno said Amazon  is also a factor.

“Amazon has been buying up a bunch of the materials as well,” Magnan said. “They’re the 500-pound gorilla in the room, which is not a bad thing, it’s just a fact. It’s e-commerce, it’s demand for some of the bigger players [building warehouses]. All of this is creating a perfect storm that, like Mike said, we haven’t seen in 20 years.”

Ereno said material shortages of all types — mezzanines, flooring, conveyors, etc. — are causing delays. Magnan also noted the high cost of labor: In the San Francisco Bay Area, warehouse labor costs are up 20% over pre-COVID levels, “if you can find the people to do the work.” The result is higher costs for tenants when they are finally able to get into the building.

“Usually, the tenant doesn’t want to absorb the cost of the warehouse until they are in the building. If I have nine months of costs, it gets built in … and amortized through the life of the contract,” Magnan said.

As long as the demand for space and for warehousing equipment doesn’t decrease, the lead times are not going to come down. Everybody is hoping the price of steel comes down, which will at least bring down the price.

The market is also seeing some issues from the semiconductor chip shortage, as all the automation and conveyors require chips, and from rising fuel costs, which are pushing up transportation-related costs.

Overall, the perfect storm of issues is forcing the delivery time of warehouses to expand dramatically at a time when more space is needed sooner. Magnan said the time to stand up a facility is typically 8 to 12 weeks from the time RK begins engaging with Warehouse Engineering on the interior design. That is now 20 to 24 weeks, Ereno said.

“Over the last year, it’s doubled in time and the cost has gone up,” Magnan said. “That puts a lot of strain on us to secure additional loan and capital [to cover costs over the longer lead time] and it also makes newer buildings less competitive in the marketplace.”

And the outlook doesn’t look good in the short term, with Ereno saying he doesn’t see demand for new warehouses dropping much over the next 18 months.

“As long as the demand for space and for warehousing equipment doesn’t decrease, the lead times are not going to come down,” he said. “Everybody is hoping the price of steel comes down, which will at least bring down the price.”