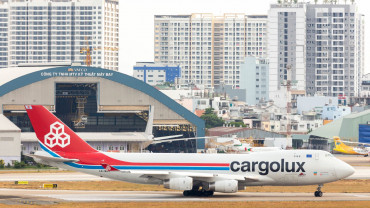 Big apparel and footwear merchants are increasingly trying to switch from ocean to air transport to make up for huge production slowdowns in Vietnam due to COVID and ensure seasonal imports arrive on time for holiday shoppers. Airfreight rates from the country are rapidly escalating because of the spike in demand for all-cargo charter capacity, according to logistics companies that manage freight movements.

The shift to cargo aircraft is underway as Vietnamese authorities, in response to rising numbers of COVID-19 cases in the south, extend by a month stringent controls on movement that have crippled factory production and sharply reduced freight activity at ports and airports. Many factories remain closed.

The situation is very fluid, with the Ho Chi Minh City city government on Friday announcing that residents will be required to shelter in place, starting Aug. 23, in an effort to better container the COVID spread, according to a local media account.

“I can tell you there are a number of major U.S. retail brands that have pulled the trigger to say, ‘This style or this particular [product line] is no longer going to be on the ocean, it’s only going to go in the air,’” Evan Rosen, president of the Americas for EFL Global, told American Shipper.

EFL is a freight forwarder with strong expertise supporting the fashion industry.

Mode conversion has been a part of importers’ risk mitigation strategies — especially out of China — much of the year to deal with ongoing supply disruption and port congestion issues. Ocean carriers don’t have enough vessels and equipment to support record demand from North America. But replacing ocean transport with air is now becoming more of a necessity for some companies operating in Vietnam.

“With the factories behind on production … it has to move by air because the production schedule is going to be significantly delayed. There’s no way they’re going to be able to put it on an unreliable ocean service” with delivery times measured in weeks, Rosen said. “So everybody wants to flip to air. Vietnam will become a very difficult market very quickly.”

The problem facing many retailers is that Vietnam is the source for a great deal of winter outerwear that can’t be easily substituted with production from another country the way a T-shirt might be. And data from Panjiva, the supply chain research unit of Standard & Poor’s Global Market Intelligence, revealed two of Nike’s Vietnamese sneaker suppliers shut down production in July due to the COVID-19 outbreak.

Bob Imbriani, executive vice president of international for Texas-based freight forwarder Team Worldwide, said he is seeing more requests too to secure air capacity out of Vietnam because exorbitant ocean rates and fees have narrowed the normal price gap with air.

“Demand is off the charts,” said Marc Schlossberg, executive vice president air cargo and sales for Unique Logistics International. The New York City freight management firm is doubling to twice per week dedicated freighter flights under its control, but operated by Korean Airlines, from Hanoi to Los Angeles and Saigon to Rickenbacker airport near Columbus, Ohio. beginning Sept. 18 through mid-November. It also controls weekly charter flights by Cathay Pacific from Hanoi and Saigon to Pittsburgh International Airport. All the airport deployed are Boeing 777 passenger aircraft that are being repurposed for all-cargo operations.

Manufacturing plants in the production areas of Ho Chi Minh City and nearby Binh Duong and Dong Nai are having trouble coping with lockdown exemptions, and strict health protocols are limiting the availability of truckers and dockworkers, according to logistics companies and supply chain analysts monitoring the situation.

Local trucking volumes have fallen more than 60% as truckers, who need to show a negative rapid COVID test result within three days, move in and out of restricted zones, Chicago-based SEKO Logistics said in a recent customer advisory. It warned that more positive cases could reduce the pool of drivers and truck capacity.

Slowdowns at Chineese freight hubs, such as the Port of Ningbo and Shanghai Pudong International Airport, attract the most business attention, but Vietnam has grown in recent years as a manufacturing source for U.S. buyers. Since 2010, Vietnam’s exports to the U.S. have quintupled to $77 billion, ranking it as the 10th-largest U.S. trade partner, according to Census Bureau data.

The U.S. began sourcing more from Vietnam in recent years when many manufacturers moved production there because of rising U.S. tariffs on Chinese products and increased labor costs in China.

Nineteen provinces are in some form of lockdown, with infections numbering about 3,000 per day. Health authorities in Ho Chi Minh City have extended restrictions, which include curfews and a ban on most public transport, through Sept. 15, according to multiple reports.

Many factories have halted production this month because of difficulty complying with two regulations aimed at ensuring social distancing for workers. The “3-in-1 spot” rule requires production facilities to make accommodations so employees can work, eat and sleep in one location to limit commuting. Under the “1-route, 2-locations” rule, employers must transport workers from the plant to a communal residence, such as a hotel or dormitory, for rest.

SEKO Logistics said fewer than 30% of plants are maintaining full production schedules. Many manufacturers, struggling to find alternative lodging and transportation, and adjust shifts in line with reduced labor availability, are extending production stoppages until Aug. 31 as the lockdowns drag on, May Yimon Aung, a risk intelligence analyst at Everstream Analytics, said via email.

According to the Vietnam Textile and Apparel Association, nearly 90% of the industry’s supply chain has been significantly impacted by the partial lockdowns, with up to 80% of garment and textile companies in the southern provinces completely halting production. In the north, about 20% to 30% of the textile and apparel suppliers have halted production. Similarly, the Korean Chamber of Commerce in Ho Chi Minh City estimated that 27% of its member companies have ceased production, while the Vietnam Association of Seafood Exporters and Producers announced that only 30% of seafood enterprises in the southern provinces remain in operation.

Meanwhile, a large number of migrant workers have left industrial centers and returned to their hometowns, which could lead to a manufacturing labor shortage when the economy reopens, according to local reports.

Cargo airlines with preexisting approvals are flying with two crews on board so that when one disembarks to rest, and is subject to a mandatory quarantine period, another crew is ready to take its place, the EFL executive said. It’s an expensive approach that reduces the number of crews available to fly and is only considered as a last resort by some carriers, but reflects what some shippers are willing to pay to avoid lost sales.

EFL is contracting with five or six airlines for about 20 to 30 charter flights per week to guarantee uplift, especially cargo-only passenger flights, to get customer shipments moved from Vietnam and other parts of Asia to the U.S., Rosen said.

And freight rates are climbing fast. During the early peak season in August, the price to ship by air typically hovers around $4 per kilogram, but it has more than doubled to between $8.50 and $10 per kilogram. Rosen predicted spot market rates will be $15 to $18 per kilogram very soon — a peak only seen at the start of the pandemic when passenger travel evaporated and governments arranged emergency freighter flights to deliver protective medical equipment.

Renting an entire cargo jet from Vietnam to Chicago, for example, now costs at least $1.1 million to $1.2 million, compared to several hundred thousand dollars in more stable periods, he added.

Data shared by TAC Index, which tracks global airfreight pricing, shows a sharp increase in cargo prices for the Vietnam market since the year’s low at the end of June.

There’s more demand than available aircraft from Ho Chi Minh City, but Rosen said EFL is talking with airlines about moving in some capacity and expects authorities to loosen up on landing rights in the next couple of weeks.

Getting charters to Vietnam isn’t easy because many are deployed to China and other major markets, Imbriani added.

EFL is urging customers to quickly provide order forecasts through the end of the year so it can secure blocks of cargo space at contract rates before it disappears and the only recourse is paying market rates for immediate delivery.

“Most of my major customers have made significant commitments through the end of the year already,” Rosen said.

COVID is also affecting Cambodia, which is complicating land-air shipments via Saigon and Bangkok. The rate from Thailand’s capital has more than doubled from pre-pandemic norms to more than $10 per kilogram, Rosen added.

The COVID restrictions have made it difficult for dockworkers and truckers to get to their jobs and slowed productivity at Cat Lai container port in Ho Chi Minh City.

Malaysian News site The Star reported that the work-eat-rest rules have cut the port’s workforce in half, with the container yard throughput lower than usual because there are fewer available stevedores, forklift operators and truck drivers. Imported goods are piling up because shuttered factories aren’t accepting inbound container deliveries.

Yard density has improved in the past week — down from 100% to 85% — after 2,000 containers were cleared. However, 106,700 twenty-foot equivalent units continue to clog the terminal, Everstream said in the email.

To ease congestion, authorities placed a temporary embargo on receiving refrigerated containers and transshipments from Cai Mep and Hiep Phuoc ports to Cat Lai until Aug. 16. Cat Lai also stopped receiving most oversized and overweight cargoes as of Aug. 5, The Star said.

For another week, all inbound vessels must notify the port authority in advance of the estimated volume of imports and empty containers on the vessel before arrival in order to give terminals sufficient time to mobilize the necessary equipment and manpower. Ocean carriers are being advised to divert to other ports, and cargo owners are being instructed to receive their cargoes directly at Cai Mep or Hiep Phuoc ports in the Mekong Delta if they have nearby facilities, Everstream Analytics said in a report last week.

According to shipping giant Maersk, cargo vessel sailings have largely continued as planned, with some departure delays.

Cai Mep is the main deepwater gateway for southern Vietnam. However, due to its proximity to Ho Chi Minh City, shippers have preferred to use Cat Lai. Both ports are facing labor shortages, and the vessel waiting time at both ports, as of last week, is about two to five days, Everstream said.

The supply chain risk analytics firm warned that containers sitting in Cat Lai for more than 90 days are likely to be moved to inland container depots to create space. If the situation gets worse, port officials may impose import quotas or temporarily stop receiving cargo ships.