The World Economy Is Suddenly Running Low on Everything 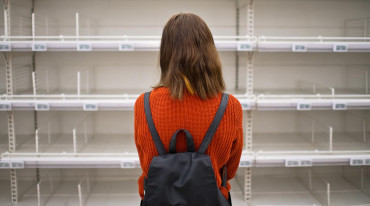 A year ago, as the pandemic ravaged country after country and economies shuddered, consumers were the ones panic-buying. Today, on the rebound, it’s companies furiously trying to stock up.

Mattress producers to car manufacturers to aluminum foil makers are buying more material than they need to survive the breakneck speed at which demand for goods is recovering and assuage that primal fear of running out. The frenzy is pushing supply chains to the brink of seizing up. Shortages, transportation bottlenecks and price spikes are nearing the highest levels in recent memory, raising concern that a supercharged global economy will stoke inflation.

Copper, iron ore and steel. Corn, coffee, wheat and soybeans. Lumber, semiconductors, plastic and cardboard for packaging. The world is seemingly low on all of it. “You name it, and we have a shortage on it,” Tom Linebarger, chairman and chief executive of engine and generator manufacturer Cummins Inc., said on a call this month.

Clients are “trying to get everything they can because they see high demand,” Jennifer Rumsey, the Columbus, Ind.-based company’s president, said. “They think it’s going to extend into next year.”

The difference between the big crunch of 2021 and past supply disruptions is the sheer magnitude of it, and the fact that there is — as far as anyone can tell — no clear end in sight. Big or small, few businesses are spared. Europe’s largest fleet of trucks, Girteka Logistics, says there has been a struggle to find enough capacity. Monster Beverage Corp. of Corona, Calif., is dealing with an aluminum can scarcity. Hong Kong’s MOMAX Technology Ltd. is delaying production of a new product because of a dearth of semiconductors.

Further exacerbating the situation is an unusually long and growing list of calamities that have rocked commodities in recent months. A freak accident in the Suez Canal backed up global shipping in March. Drought has wreaked havoc upon agricultural crops. A deep freeze and mass blackout wiped out energy and petrochemicals operations across the central U.S. in February. Less than two weeks ago, hackers brought down the largest fuel pipeline in the U.S., driving gasoline prices above $3 a gallon for the first time since 2014. Now India’s massive COVID-19 outbreak is threatening its biggest ports.

For anyone who thinks it’s all going to end in a few months, consider the somewhat obscure U.S. economic indicator known as the Logistics Managers’ Index. The gauge is built on a monthly survey of corporate supply chiefs that asks where they see inventory, transportation and warehouse expenses — the three key components of managing supply chains — now and in 12 months. The current index is at its second-highest level in records dating to 2016, and the future gauge shows little respite a year from now. The index has proven unnervingly accurate in the past, matching up with actual costs about 90% of the time.

To Zac Rogers, who helps compile the index as an assistant professor at Colorado State University’s College of Business, it’s a paradigm shift. In the past, those three areas were optimized for low costs and reliability. Today, with e-commerce demand soaring, warehouses have moved from the cheap outskirts of urban areas to prime parking garages downtown or vacant department-store space where deliveries can be made quickly, albeit with pricier real estate, labor and utilities. Once viewed as liabilities before the pandemic, fatter inventories are in vogue. Transport costs, more volatile than the other two, won’t lighten up until demand does.

“Essentially what people are telling us to expect is that it’s going to be hard to get supply up to a place where it matches demand,” Rogers said, “and because of that, we’re going to continue to see some price increases over the next 12 months.”

More well-known barometers are starting to reflect the higher costs for households and companies. An index of U.S. consumer prices that excludes food and fuel jumped in April from a month earlier by the most since 1982. At the factory gate, the increase in prices charged by American producers was twice as large as economists expected. Unless companies pass that cost along to consumers and boost productivity, it’ll eat into their profit margins.

A growing chorus of observers is warning that inflation is bound to quicken. The threat has been enough to send tremors through world capitals, central banks, factories and supermarkets. The U.S. Federal Reserve is facing new questions about when it will hike rates to stave off inflation — and the perceived political risk already threatens to upset President Joe Biden’s spending plans.

“You bring all of these factors in, and it’s an environment that’s ripe for significant inflation, with limited levers” for monetary authorities to pull, said David Landau, chief product officer at BluJay Solutions, a U.K.-based logistics software and services provider.

Policymakers, however, have laid out a number of reasons why they don’t expect inflationary pressures to get out of hand. Fed Governor Lael Brainard said recently that officials should be “patient through the transitory surge.” Among the reasons for calm: The big surges lately are partly blamed on skewed comparisons to the steep drops of a year ago, and many companies that have held the line on price hikes for years remain reticent about them now. What’s more, U.S. retail sales stalled in April after a sharp rise in the month earlier, and commodities prices have recently retreated from multiyear highs.

The strains stretch all the way back to global output of raw materials and may persist because the capacity to produce more of what’s scarce — with either additional capital or labor — is slow and expensive to ramp up. The price of lumber, copper, iron ore and steel have all surged in recent months as supplies constrict in the face of stronger demand from the U.S. and China, the world’s two largest economies.

Crude oil is also on the rise, as are the prices of industrial materials from plastics to rubber and chemicals. Some of the increases are already making their ways to the store shelf. Reynolds Consumer Products Inc., the maker of the namesake aluminum foil and Hefty trash bags, is planning another round of price increases — its third in 2021 alone.

Food costs are climbing, too. The world’s most consumed edible oil, processed from the fruit of oil palm trees, has jumped by more than 135% in the past year to a record. Soybeans topped $16 a bushel for the first time since 2012. Corn futures hit an eight-year high while wheat futures rose to the highest since 2013.

A United Nations gauge of world food costs climbed for an 11th month in April, extending its gain to the highest in seven years. Prices are in their longest advance in more than a decade amid weather worries and a crop-buying spree in China that’s tightening supplies, threatening faster inflation.

Next-level technologies hold the potential to enhance safety and efficiency in transportation, but it takes a lot of work behind the scenes to advance these ideas from concept to reality. We talk with Christoph Mertz of the Robotics Institute at Carnegie Mellon and Huei Peng of the University of Michigan. Hear a snippet above, and get the full program by going to RoadSigns.

A big reason for the rally is a U.S. economy that’s recovering faster than most. The evidence of that is floating off the coast of California, where dozens of containerships are waiting to offload at ports from Oakland to Los Angeles. Most goods are flooding in from China, where government figures last week showed producer prices climbed by the most since 2017 in April, adding to evidence that cost pressures for that nation’s factories pose another risk if those are passed on to retailers and other customers abroad.

Across the world’s manufacturing hub of East Asia, the blockages are especially acute. The dearth of semiconductors has already spread from the automotive sector to Asia’s highly complex supply chains for smartphones.

Meanwhile, running full tilt between factories and consumers are the ships, trucks and trains that move parts along a global production process and finished goods to market. Container vessels are running at capacity, pushing ocean cargo rates to record highs and clogging up ports. So much so that Columbia Sportswear Co.’s merchandise shipments were delayed for three weeks and the retailer expects its fall product lineup will arrive late as well.

Rail and trucking rates are elevated, too. The Cass Freight Index measure of expenditures reached a record in April — its fourth in five months. Spot prices for truckload service are on track to rise 70% in the second quarter from a year earlier, and are set to be up about 30% this year compared with 2020, Todd Fowler, a KeyBanc Capital Markets analyst, said in a May 10 note.

“We expect pricing to remain elevated given lean inventories, seasonal demand and improving economic activity, all of which is underpinned by capacity constraints from truck production limitations and driver availability challenges,” Fowler said.